French anti-Semitism is backdrop for play 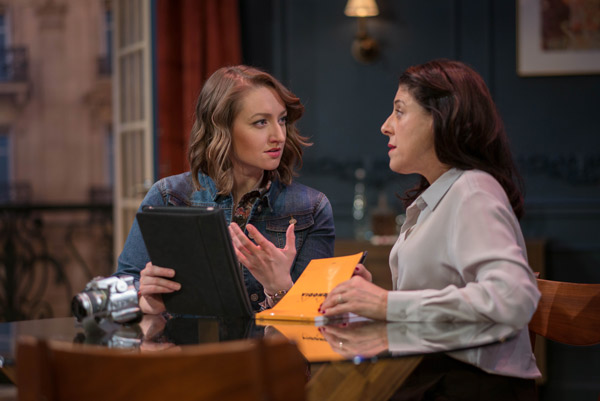 Jenny Ashman (Reina) and Kelly Wolf (Deborah) discuss the situation in the play “Paris Time” which is set to premiere at the Capital Repertory Theatre.

The play “Paris Time” by Steve Peterson will have its world premiere at the Capital Repertory Theatre, Jan. 26–Feb. 18, in a production steered by director Gordon Greenberg. The theater is located at 111 North Pearl St., Albany.

Paris Time relates the tale of Charlie (Spencer Moses) and Deborah (Kelly Wolf) who are American expatriates, living in the 16th Arrondissement on his salary as a consultant for a major U.S. based firm with global concerns. She finds focus with a human rights organization, exposing sometimes subtle, sometimes rampant French anti-Semitism.

When a brick, believed to be thrown by a Muslim, goes through the glass of a Jewish employee’s car, Charlie and Deborah’s worlds meet in new and unexpected ways; prompting hard words, hard glances and second thoughts about love.

The arrival, from stateside, of Charlie’s boss, eager to settle the situation quickly and quietly, only serves to turn up the heat.

Charlie and Deborah are, as Peterson puts it, “blindsided by current events.”

Both Peterson and Greenberg have recently spent time in Paris. Peterson, who lived in the city in the early years of this century, visited again in 2017, fascinated by the changes that have taken place socially and politically. Greenberg, an admitted Francophile, has been to the country many times.

“This play is about what is taking place in France right now,” Greenberg says, referring to a burgeoning nationalism. “Our news here, in the U.S., is more colloquial, so we generally don’t see it. But it was brought home to us in August, with the Unite the Right rally in Charlottesville, Va. We, too, in America, are leaning towards a frightening racial conservatism; and people who don’t believe in anything will be stoking that for personal gain.”

“I found the script compelling,” Greenberg continues. “I was struck by the subject matter as well as by Steven’s writing, which is economical and elegant. While I was in Paris, I took note of a very different temperature regarding the continuing wave of anti-Semitism there. There’s been an exodus from France, not only because of taxation, but by Jews who feel unsafe and have been fleeing to Israel and the United States.”

“Paris Time’s” came to the REP through the company’s Next Act: New Play Summit, a playwriting contest, which, in collaboration with Proctors, puts new work on the stage each season.

Greenberg first worked at the REP as an actor, in 1991. “Paris Time” is his ninth visit as director. Greenberg has acted on Broadway and in London’s West End. He is co-writing the forthcoming Broadway stage adaptation of “The Secret of My Success” for Universal Stage Productions.

While living in Paris in the early 2000s, Peterson, the writer, a Chicago resident, actually worked as an internal communications consultant for a large multinational firm. He is a resident playwright at Chicago Dramatists, and a member of the Dramatists Guild of America. Other produced works include “The Actuary” (Peninsula Players, Fish Creek, Wis.), “Affluence” (Theatre 40, Beverly Hills, Calif.) and “The Invasion of Skokie” (Chicago Dramatists).