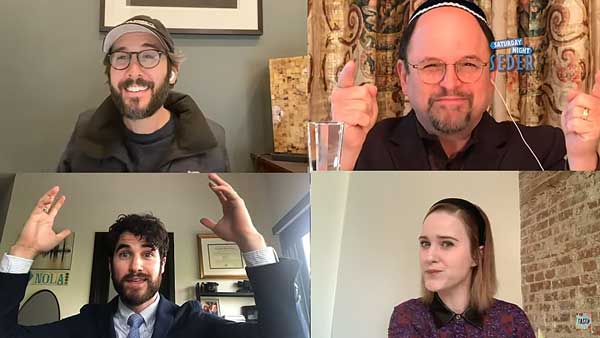 By RON KAMPEAS
NEW YORK CITY (JTA) – With its glittering assembly of stars, jokes that worked and attendees who could, well, sing, it was the Zoom Seder you wished you had.

The Saturday Night Passover Seder that aired on YouTube Saturday, April 11, brought together dozens of celebrities and raised $2.6 million for the CDC Foundation, the nonprofit wing of the Centers for Disease Control and Prevention, the government agency guiding America through the coronavirus pandemic.

The broadcast, which drew more than 1 million viewers, had a distinctive liberal coastal Jewish outlook, informed by entertainment biz sensibilities, which was natural enough: No one on the webcast claimed to speak for all Jews, or all American Jews, or for Jews in any frame.

Still, as a coming together of many of the Jewish community’s most visible Jews, the event offered insights about where American Jews are in the national thinking, or perhaps more precisely, where a lot of American Jews want to believe they are. Here are four messages conveyed by the Saturday Night Seder.

Anyone Can Be Jewish?
Jason Alexander, best known for his turn as George Costanza on “Seinfeld,” launches the proceedings with an upbeat ditty called “Dayenu” and welcomes co-choristers Darren Criss, Josh Groban and Rachel Brosnahan.

After Groban does a cantorial turn, Alexander praises him as “the greatest Jewish voice since Zero Mostel,” and Groban has to explain that no, he is not Jewish. Neither is Criss or Brosnahan. Is that a problem? Brosnahan asks.

Not at all, Alexander responds.

“Tonight it doesn’t matter if you are or aren’t a Jew,” he says.

Of course, the concept of cultural appropriation complicates matters. Should the abled play people with disabilities? Should cisgender people be cast in transgender roles?

Criss is a straight man whose best-known role, Blaine Anderson on “Glee,” was gay. It’s been an issue for non-Jewish actors who play Jews as well — as Brosnahan, an Irish American whose signature role is “The Marvelous Mrs. Maisel” well knows.

Groban y is a complicated story: His father is a Jew who converted to Christianity when he married Groban’s mother. (Groban and Criss played Tevye in high school productions of “Fiddler on the Roof.”)

The producers of the Saturday Night Seder seem to conclude that appropriation is something to celebrate, not condemn. It’s not exactly a new phenomenon: Jews in the 1970s cheered Valerie Harper’s portrayal on TV of Rhoda Morgenstern, even though Harper was not Jewish, because the role was so positive. And if you’re of a certain age, you’ll remember dusty albums in your parents’ collection of Harry Belafonte and Pete Seeger singing Jewish songs.

Belafonte and Seeger, notably, also were progressives, and their embrace of Jewish culture stems from a period when being Jewish was, at least in the public mind, identified with being on the left. Much of the Saturday Night Passover Seder includes nods to progressive politics. For the Hollywood Jews who put together this seder, the opening is a callback to a time, perhaps more imagined than real, when Jews had a clear political home.

Being Jewish Is Unique
So anyone can play at being Jewish, but understand, the cumulative historical experience is unique — and also has universal meaning.

Actors Richard Kind and Debra Messing, in recounting the story of the Exodus, note the ancientness of Jew-hatred.

Actor Judith Light casts the composition of “Somewhere Over the Rainbow” by Harold Arlen and Yip Harburg as a deeply political repudiation of fascism, a yearning by American Jews for better times as Nazism cast its shadow over Europe. Spliced amid Ben Platt’s rendition of the song, Light calls the lyrics “near prophetic” and notes that the quintessential American movie it frames, “The Wizard of Oz,” opened on screens just two months after the Kristallnacht massacres in Europe.

“Hear the lyrics in this context and suddenly the words are no longer about wizards and Oz, but about Jewish survival,” Light says.

Fight For Freedom
She quotes Harburg to make the point that the particularism of Jewish suffering has infused the American sensibility, at least as it is understood by the folks writing and performing this seder.

“The Passover Seder is devoted entirely to the fight for freedom,” Harburg said.

“Its allegorical significance transcends the Abrahamic faiths,” Reza Aslan, the Muslim scholar of religions, says of the seder. “The story of Exodus is the story of the movement from oppression to freedom.”

The price of admission for the celebrity content is a series of mini-sermons by congregational rabbis interspersed throughout.

OK, the mini-sermons are compelling and easy to digest (insert matzah joke here). What their presence at this seder conveys, however, is that doing Jewish isn’t just a gestalt, a cultural outlook for everyone to enjoy. It’s a communal affair. It’s why having to do a virtual seder is so heartbreaking, even as doing so opens new opportunities.

Rabbi Sharon Brous of the IKAR congregation in Los Angeles describes the commandment to hold the seder every year as creating “the muscle memory for hope.”

That especially is brought home when Rabbi Dana Benson of Temple Beth Am in Seattle sings a medley of Passover parody songs including “Goodbye, goodbye, Mitzraim,” to the tune of “To Life,” and “Everything’s Coming Up Moses.”

The gentle humor is familiar to anyone who has ever sat through an American seder, but it was especially familiar to Barbara Sarshik, a congregant at Temple Rodef Shalom in Falls Church, Virginia, who composed the lyrics and then posted them as part of her ongoing Passover song parody project. (She contacted the Saturday Night Seder organizers, who updated their website with credit.)

“It creates so much joy and togetherness to have people sing these words to familiar melodies,” a fan on Sarshik’s website says.

Next Year, Where?
Israel features throughout this seder, well, delicately. Benson says her favorite song is “BaShana Habaa” and she sings a bar or two, but does not mention that the song of longing for peace was written by Nurit Hirsh and Ehud Manor after the 1967 Six-Day War, resonating with Israelis who were relieved from what they perceived from a threat of extinction and longed for peace with their neighbors. She does not mention that it is Israeli at all.

Israeli flags crop up now and then behind a few of the young people who join in chorus for Ma Nishtanah, but they are not acknowledged. Israel’s biggest role comes during a monologue by Harvey Fierstein explaining why as a child he was nonplussed by the seder’s conclusion, “Next Year in Jerusalem,” that amounts to a kaleidoscope of American Jewish anxieties and longings about Israel. In Fierstein’s telling, Israel is simultaneously a necessity, a source of longing that can even be sexual, and an arid badland tainted by its association with President Donald Trump and his family.

“It’s hot, you’re surrounded by a vast majority of anti-Semites and all the cute soldiers in uniform are girls,” the playwright and performer says. “It made no sense to me that Jews would wanna go to Israel.”

But Fierstein says he has come to understand Jerusalem as a metaphor: “Next year we will be in a world that is caring and supportive of its inhabitants.”

That leads into an original song, “Next Year,” which concludes that phrase opening with a number of wishes (“We’ll breathe in the sky,” “The world will break open”) but with “Jerusalem” mentioned only once. Movingly, a number of Jewish medical professionals working on the front lines of the coronavirus pandemic describe their longing for seders with family.

So is Israel forgotten? Not quite.

The final words are left to Alexander, who has previously expressed an emphatic if critical affection for Israel: “Good night everybody, stay safe, stay healthy, stay inside, next year in Jerusalem.”

‘The Prince of Egypt’ composer on the musical theater adaptation, his career and his family’s Passover tradition
Local Holocaust survivors to join for Facebook Yom HaShoah observance