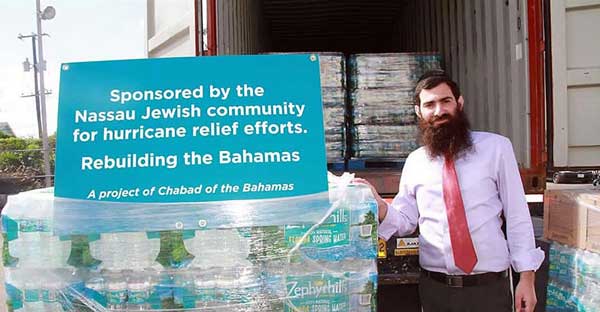 By MORDECHAI LIGHTSTONE
(Chabad.org via JNS) – As Hurricane Dorian was unleashing its devastation on the Bahamas, Rabbi Sholom and Sheera Bluming, co-directors of Chabad of the Bahamas, hunkered down in the capital city of Nassau, making phone calls to residents, galvanizing the community, coordinating with government aid officials and rallying volunteers during their country’s time of need.

Helping Neighbors
After pummeling the islands for two days with winds in excess of 180 miles per hour and rain pouring down by the inches, Dorian moved on. At least 30 people have been reported dead on Grand Bahamas and Abaco islands, with scores more unaccounted for or injured. With power still out and some areas still difficult to access, the true extent of the destruction is only now becoming clear.

“During the hurricane, we got so many calls, texts and e-mails from people around the world asking how they can help,” Sheera Bluming tolds Chabad.org. “Now, we’re all doing all we can to help our neighbors in their time of need.”

The only Jewish organizational presence on the island, the Blumings are rallying their community and folks in Florida to assist with the relief efforts. Seven Chabad centers in South Florida have begun collecting supplies, including food, water, other staples, tarps and generators. A medevac flight—one of the first to get clearance to land in Abaco—was coordinated by Chabad, shuttling in necessary items, including four satellite phones to help people attempt to reach loved ones. EMTs on the flight managed to airlift out the injured for treatment in Nassau.

“In life, we are called upon to bring light in dark moments,” says Sholom Bluming, reflecting on the reports of destruction and tragedy filtering in.

Coordinating Relief In Florida
Even while traveling between Miami and Nassau to help coordinate the relief work, the rabbi has been attempting to get in contact with community members in Freeport. Once home to the nation’s original Jewish settlers, the Jewish community in Freeport—a city, district and free-trade zone on the island of Grand Bahama of the northwest Bahamas—has dwindled in size.

Tony Gee, a British expat with a distinguishable Cockney accent, moved with his wife to Freeport in 1966. “I’ve seen quite a few hurricanes in my time here,” he says. “But this is by far the worst.” With his wife in Miami for a wedding, Gee rode out the storm at home with his dog.

“You sit in a dark room, with the wind howling around you, and the sea coming down over the walls and onto the roof of the house,” he reports. “It was a bit frightening being there by myself.”

Though his house was relatively unscathed, his two jewelry stores were flooded. Without electricity and with dwindling supplies of food, he left the businesses boarded up until he can properly assess the extent of the damage. Gee remains hopeful. “Rabbi Bluming and I are going to put our heads together and see what we can do.”

Summer Faerman from Boca Raton, Fla., is one of those helping in the now officially dubbed relief efforts. Turning to her community, she’s helping bring in much-needed supplies.

“Being Floridians, we understand hurricanes all too well. We’ve lost property many a time, and we’ve rebuilt and survived,” she says. “We want to make sure we are doing our part to make a difference in the Bahamas, and Chabad has stepped up to make sure that all of our supplies and goods can get into the hands of people in need.”

‘Archaeology Of The Religion Of Ancient Israel’ course slated for B’nai Sholom
Del B. Salmon named president of the Daughters of Sarah Nursing Center Board