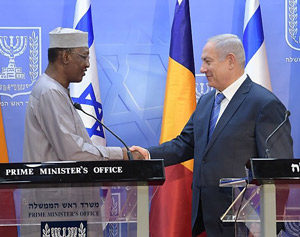 JERUSALEM (JTA) — Chad and Israel will be resuming diplomatic relations that were severed nearly 50 years ago.

Israeli Prime Minister Benjamin Netanyahu said he will fly to the majority Muslim Africa nation “soon,” where he and President Idriss Deby will make the announcement, according to a statement by the prime minister’s office on Tuesday, Nov. 27. The Republic of Chad severed ties in 1972.

On Tuesday, Deby completed what has been called a historic three-day official visit to Israel. He and Netanyahu met again prior to Deby’s departure.

It is not known if the talks included weapons sales. Reuters reported that Israel sent weapons to Chad this year to fight against northern rebels.

The Netanyahu government has been reaching out to African nations, and the prime minister indicated during Deby’s visit that he will visit more African countries in the near future.

On Sunday, Deby said during a meeting with Netanyahu that “The relations between our countries were cut in 1972 for specific historic reasons, but our special relations continued all the time. The current visit to your beautiful country expresses our desire to take the relations that existed all the time and make them stronger.”

He added: “The resumption of diplomatic relations with your country, which I desire, does not make us ignore the Palestinian issue. My country is profoundly attached to the peace process and has shaped the Arab peace initiative, the Madrid principles and existing agreements.”