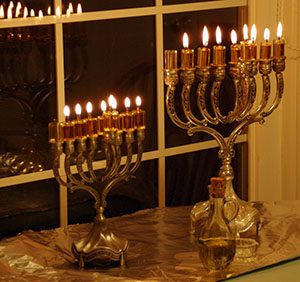 By My Jewish Learning staff via JTA
How do you pronounce Chanukah? Is there a correct spelling for the holiday? Why does Chanukah last eight days?
These are just some of the frequently asked questions about the Festival of Lights. Here are the answers to those questions and others.

How do you pronounce Chanukah?
English speakers generally pronounce it HAH-nuh-kuh. However, some people prefer the Israeli pronunciation, which is khah-new-KAH.

Is there a correct way to spell Chanukah?
Chanukah is a Hebrew word, not an English one, and there is no standard transliteration. My Jewish Learning uses “Hanukkah,” but “Chanukah,” “Chanukka” and “Hanukka” are also common spellings.

Why does Chanukah last eight days?
There are two explanations for the eight-day length. One is that Chanukah commemorates not just the Maccabees’ victory and rededication of the Temple, but the miracle of the oil: one day’s supply for the Temple lamp lasted eight days.
Another explanation is that the first Chanukah celebration was actually a delayed Sukkot celebration, and Sukkot — which, like Passover, is a pilgrimage festival — traditionally lasts eight days.

What is Chanukah about?
Chanukah  celebrates the Maccabees’ rededication of the Temple in Jerusalem after its defilement by the Syrian Greeks in 164 BCE. According to rabbinic tradition, the holiday also commemorates the miracle of the oil noted above.
Some people see Chanukah as a celebration of religious freedom, whereas others see it as a triumph of tradition over assimilation. For many people, it is simply an opportunity for festivity during the darkest time of the year, the winter solstice.

Is it OK to celebrate both Chanukah and Christmas?
Depends on who you ask. Many Jews strongly disapprove of Jews celebrating Christmas, which is a Christian holiday, and some feel alienated by the ubiquity of Christmas in American culture. However, others see Christmas as more a cultural celebration than religious holiday and enjoy participating in Christmas celebrations with non-Jewish friends or non-Jewish family members.

Why does Chanukah fall on a different date each year?
Chanukah always falls on the 25th of the Hebrew month of Kislev, which usually is sometime in December. Because the Jewish calendar is a combination of solar and lunar, the date on the Gregorian calendar fluctuates each year.

Why do Jews play dreidel on Chanukah?
There are different explanations for this tradition, but historians believe the dreidel is an adaptation of another top-spinning game that Europeans played at Christmas time.

Do Jews traditionally exchange gifts on all eight nights of Chanukah ?
Actually, exchanging gifts on Chanukah is a relatively new tradition. American Jews used to exchange gifts on Purim, but in the late 19th century there was a shift from Purim to Chanukah. Christmas, which falls at the same time of year, became a national holiday in America at this time, and the Jewish custom of gifts on Chanukah shifted as the Christian holiday’s consumerism grew.

When it comes to how many gifts to exchange and when, families have different traditions. Many people prefer to limit the gift exchange to just a few nights to de-emphasize the materialistic aspects of the holiday.

Why is the first night of Chanukah one day before the date listed on my calendar?
While dates on the Gregorian calendar begin at midnight, dates on the Hebrew calendar begin at sundown — that means a holiday starts hours before the corresponding date on the Gregorian calendar. This difference is particularly noticeable on Chanukah, since celebrations tend to take place at night rather than during the day. So while your calendar may say Chanukah starts on Dec. 13, it actually begins the preceding evening.

Do Jews traditionally go to synagogue on Chanukah ?
Jewish law does not require Jews to observe hanukah anywhere outside the home. However, some special liturgy and readings are added to the daily and Shabbat prayer services that take place during Chanukah.

I tried to find the story of the Maccabees in the Bible! Where is it?
The Book of Maccabees, in which the Chanukah story is detailed, was not included in the Hebrew Bible and instead is in a category of texts called Apocrypha. For centuries, some Jews used to read the story from an Aramaic-language scroll called The Scroll of Antiochus, which detailed the Maccabees’ victories and added numerous legends.

Why do Jews eat greasy food on Chanukah?
It is traditional to eat fried foods, such as latkes and jelly doughnuts (called sufganiyot in Hebrew) as a way of commemorating the miracle of the oil that lasted eight days. If you’re worried about the health (or waistline) implications, try baking your latkes  — or consider celebrating the oil by dipping bread into a variety of gourmet olive oils.

Another traditional Chanukah food, cheese, unfortunately isn’t much better for those concerned about fat. The cheese tradition is in honor of Judith, a woman who helped the Maccabee effort by feeding salty cheese and wine to one of Antiochus’ generals — and then beheading him.

In Budapest, Chanukah comes out of the shadows and onto the ice rink
Bnei Menashe children lighting candles for the first night of Chanukah in Churachandpur, India.