By Rabbi RAYMOND APPLE
Ma’oz Tzur is part of the tug of war between Ashkenazim and Sephardim. Both groups started off with Psalm 30, “Mizmor Shir Chanukat HaBayit,” as the Chanukah song (Sof’rim 18:2). Then at some point in the Middle Ages a person named Mordechai wrote a history-poem that began with the words Ma’oz Tzur, “Rock of Your stronghold, “which come from Isaiah 17:10.
To make sure the order of verses was maintained he started each of the first five verses with the letters that made up his name.
Eventually the Sephardim adopted the Ashkenazi song, though at the same time they kept Psalm 30.

Where did the poet get his version of history?
He knew what general themes he wanted, ranging from pharaonic Egypt to Nebuchadnezzar’s Babylon, the Persian rabbi Mordechai and his King Ahasuerus, Antiochus and the Greeks, and even the learned rabbis (“b’nei vinah,” “men of understanding”) who ordained the singing of Hallel on Chanukah.
The poem utilized phrases and allusions from the Bible, Talmud and Midrash. “Malchut Eglah,” the kingdom of the calf, comes from Jeremiah 46:20, and refers to Egypt. “Shoshanim”— lilies — is the Jewish people (Shir HaShirim 2:2).

How did the well-known Ma’oz Tzur melody become what it was sung to?
It too was an Ashkenazi tune, though it began as a German folk tune that the Jews picked up from their European environment and turned into the musical motif of Chanukah— not just the Ashkenazim but the Sephardim too.

The sixth verse has a whole range of hints that clearly imply Christianity but are not spelled out because the Jews feared Church censorship. It says, “Thrust away Admon in the shadow of Tzalmon”—“Admon”, red, is a hint of Rome; “Tzalmon,” originally a hill near Shechem, refers to Christianity because “tzelem” is a cross.
The verse ends with a rather puzzling phrase about seven shepherds at the end of days. The phrase originates in Micah 5:4 and tells us that in Messianic times there will be a sevenfold (i.e. complete) team of Divine agents that protect and preserve Jewry and the Holy Land. 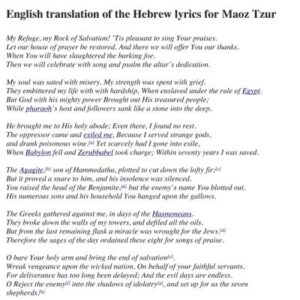 Rabbi Apple was chief minister of the Great Synagogue, Sydney, Australia  for 32 years. He also held many public roles, particularly in the fields of chaplaincy, interfaith dialogue and Freemasonry, and is the recipient of several national and civic honours. Now retired, he lives in Jerusalem and blogs at http://www.oztorah.com.