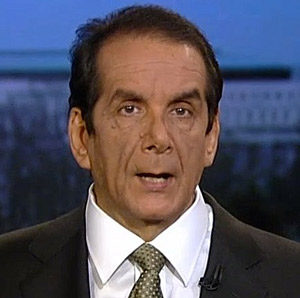 NEW YORK CITY (JTA) – Charles Krauthammer, a fierce defender of Israel and one of the most widely read conservative columnists of his generation, has died.

The Pulitzer Prize winner wrote earlier in June that he had an aggressive form of cancer and had only  weeks to live. The letter appeared on the websites of both of his employers, Fox News Channel and The Washington Post. He was 68.

Krauthammer was outspoken for decades in his support of Israel, and was a lacerating critic of the Obama administration. His rejection of the 2015 Iran nuclear deal was influential in galvanizing Jewish organizational opposition to the deal. He regularly made himself available to speak at Jewish events.

“Dr. Krauthammer said his politics were shaped by growing up in the post-Holocaust years with Jewish parents who had escaped the Nazis in Europe,” The Washington Post wrote.

In an essay in The Weekly Standard in 1998, he wrote about Israel’s vulnerability and his attachment to the Jewish state.

“Israel too is a small country. This is not to say that extinction is its fate. Only that it can be,” he wrote. “Moreover, in its vulnerability to extinction, Israel is not just any small country. It is the only small country — the only country, period — whose neighbors publicly declare its very existence an affront to law, morality, and religion and make its extinction an explicit, paramount national goal. Nor is the goal merely declarative. Iran, Libya, and Iraq conduct foreign policies designed for the killing of Israelis and the destruction of their state. They choose their allies (Hamas, Hezbollah) and develop their weapons (suicide bombs, poison gas, anthrax, nuclear missiles) accordingly. Countries as far away as Malaysia will not allow a representative of Israel on their soil nor even permit the showing of ‘Schindler’s List’ lest it engender sympathy for Zion.”

Krauthammer returned to that theme in 2015, lamenting what he called Arab recalcitrance in foiling chances for peace.

“Peace awaits three things. Eventual Palestinian acceptance of a Jewish state. A Palestinian leader willing to sign a deal based on that premise. A modicum of regional stability that allows Israel to risk the potentially fatal withdrawals such a deal would entail,” he wrote. “I believe such a day will come. But there is zero chance it comes now or even soon.”

Krauthammer also was among a small but unyielding core of conservatives who opposed Donald Trump, even as he closed in on the Republican presidential nomination in 2016 and then the presidency. Krauthammer cautioned against “Trump derangement syndrome” — criticizing the president even when his policies were consistent with conservative doctrine — and denounced Trump’s unfiltered rhetoric, which he called “vainglorious.” (Trump called Krauthammer an “overrated clown.”) He said Trump’s failure to unequivocally condemn white supremacists and neo-Nazis whose protests in Charlottesville, Va., culminated in a deadly attack on a counterprotester was a “moral disgrace.”

Krauthammer, a New York native who was raised in Montreal, was a first-year medical student at Harvard when a diving accident put him in a wheelchair for life. He became a psychiatrist and first emerged in the political sphere as a speechwriter for Vice President Walter Mondale during the Carter administration. Like many hawkish Jewish Democrats, he was soon attracted to the hardline Cold War postures of President Ronald Reagan.

He won the Pulitzer Prize for Commentary for his Washington Post columns in 1987, and the National Magazine Award for his work at The New Republic in 1984.

He opposed the Oslo Accords, primarily distrusting the renunciation of terrorism by the late Palestinian leader Yasser Arafat — a view that seemed vindicated when Arafat embraced the second intifada. Krauthammer also was an outspoken advocate of the Iraq War, scrambling to defend his advocacy when the war went south.

Krauthammer in his note to readers said  that he had no regrets. “It was a wonderful life — full and complete with the great loves and great endeavors that make it worth living,” he said. “I am sad to leave, but I leave with the knowledge that I lived the life that I intended.”

He is survived by his wife, Robyn, and his son, Daniel, a syndicated columnist like his father.