Charlotte Rae, who starred as Mrs. Garrett on ‘The Facts of Life,’ dies at 92 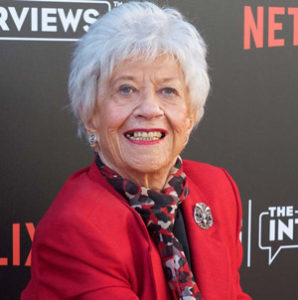 NEW YORK CITY (JTA) – Actress Charlotte Rae, who won acclaim playing the housemother Edna Garrett on the sitcom “The Facts of Life,” has died. She was 92. Rae, who was nominated for Emmy and Tony Awards, died Sunday, Aug. 5, at her home in Los Angeles. She was diagnosed last year with bone cancer; she had survived pancreatic cancer.

Rae first appeared as Mrs. Garrett in a recurring role as a housekeeper on the popular sitcom “Diff’rent Strokes,” and then for seven years on its spinoff, “The Facts of Life,” beginning in 1979. Her Emmy nomination was for the show.

Her career also featured appearances on more than 50 television shows.

Rae worked in theater before her TV career took off, garnering two Tony nominations —  in 1966 as best featured actress in a musical in “Pickwick,” and in 1969 for best actress in a play for “Morning, Noon and Night.”

Her last role in a feature film was alongside Meryl Streep in the 2015 movie “Rikki and the Flash.” She also appeared in films such as Woody Allen’s “Bananas” in 1971, “Hair” in 1979 and the Adam Sandler comedy “You Don’t Mess with the Zohan” in 2008.

Rae was born Charlotte Rae Lubotsky in Milwaukee, Wisconsin, to Russian Jewish immigrants. Her mother, Esther, was a childhood friend of the future Israeli prime minister Golda Meir, also a Milwaukee native. Rae reportedly dropped her Jewish-sounding surname on the advice of an unnamed radio personality.

She released her autobiography, The Facts of My Life, in 2015, co-written by her son Larry Strauss.

Rae was married for 25 years to composer John Strauss, but divorced in 1976 when he came out as bisexual.  Her son Andrew, who was diagnosed with autism, died in his mid-40s of a heart attack in 1999.

She is survived by her son, Larry; three grandchildren; and a sister, Miriam Guten.