China’s coronavirus cover-up and the implications for Israel 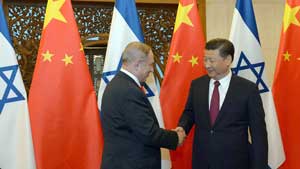 By ARIEL BEN SOLOMON
(JNS) – Growing calls for an investigation into China’s handling and possible cover-up of the coronavirus outbreak have observers debating the potential implications for both Israeli and U.S. policy on China.

In Israel, there was concern over Chinese penetration of key areas of the economy even before the pandemic. China is Israel’s second-largest trading partner after the United States, with $11.5 billion in annual trade, according to data gathered by Bloomberg. However, in the aftermath of the global coronavirus pandemic the United States is likely to increase its pressure on Israel in this regard, some experts believe.

Israel Needs Plan
Carice Witte, the founder and executive director of the Sino-Israel Global Network & Academic Leadership (SIGNAL), told JNS, “Unless at the end of this Israel has a comprehensive plan ready for its relations with China that addresses U.S. concerns regarding Israel-China cooperation, it is highly likely that due to the fallout of the virus, the U.S. will ask Israel to limit its dealings with China.”

The only way Israel can prevent this, said Witte, is to take the initiative.

“If Washington sees that Jerusalem has taken sufficient precautions not only regarding Israel’s national security but also what the U.S. considers it own security issues, it may see no need to pressure Israel regarding a range of fields where we are working with China, from technology to infrastructure to academic research,” she said.

Threats
In 2015, Israel extended a 25-year offer to the state-controlled Shanghai International Port Group to operate its Haifa port, and Chinese investment in Israeli hi-tech has also spiked in recent years. Senior U.S. officials, including Secretary of State Mike Pompeo and former national security adviser John Bolton, have warned that the United States will limit intelligence sharing if Israel does not restrict Chinese investment in the country. There was even a report that the U.S. Navy would stop its longtime operations in the Haifa port if the Chinese company took over its operation.

However, according to Efraim Inbar, president of the Jerusalem Institute for Strategic Studies, despite the fact that China is an authoritarian state with no scruples or moral constraints and may well have covered up the initial outbreak, delaying the response of other countries, including Israel, to the crisis, “Israel has to be very careful in its relations with Beijing.”

This, he said, is because the Chinese can decide whether or not to “allow North Korea to transfer sensitive technology to Israel’s adversaries,” though he noted that China tries not to leave fingerprints as to its involvement in such transfers.

In addition, he said, claims that China is “taking over” the Haifa port are overblown.

“The Chinese did not take over the Haifa port. They are building an extension of it,” he said, though he added that “nevertheless, this project was a result of careless processes within Israel’s bureaucracy.”

Great care must be taken when dealing with China, for several reasons, said Inbar

Problematic Political Consequences
“We should be careful in allowing Chinese firms linked to the government to control some of our infrastructure projects. Only recently [did] Israel establish an inter-ministerial committee to deal with foreign investment in sensitive parts of our economy.”

Asia Times columnist David P. Goldman told JNS that While it is possible that the Chinese authorities hid the true casualty rate in Wuhan, if so it was likely done to help contain the spread of the virus and ease anger against the government’s handling of the crisis. In addition, he said, even if an initial coverup of the outbreak did delay other countries’ response, “somehow the other Asian countries got on top of this much quicker than the West.”

Punishment for China?
Nevertheless, there is increasingly harsh rhetoric coming out of the U.S. over China’s handling of the initial outbreak, as well as calls to punish China in some way, or even to decouple the U.S. economy from the growing world power.

China hawks in Congress are calling for China to be held accountable, with one of the latest moves in this regard being Sen. Tom Cotton (R-Ark.) and Rep. Dan Crenshaw (R-Tex.) introducing legislation to allow Americans to sue China in federal court over the death and economic damage caused by the virus. “By silencing doctors and journalists who tried to warn the world about the coronavirus, the Chinese Communist Party allowed the virus to spread quickly around the globe,” Cotton said in a statement.

In a recent column, Goldman argued that it is unrealistic to decouple the country from the Chinese economy, since doing so would undermine America’s interests. But as the evidence mounts of a Chinese coverup, the push to retaliate against China in some manner is gathering momentum.

The question is what form that retaliation will take, and whether the post-coronavirus environment will convince—or force—Israel’s leaders to scale back ties with China as tensions with the United States escalate.

From prayers to puppets: A one-stop shop for livestreams aims to outlast the pandemic
Calling Dr. Kronkheit or President Trump for medical advice—not the best idea