Collateral damage from a request for a “favor” 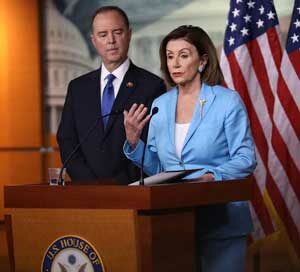 DC Report
By Douglas Bloomfield
The day after Special Counsel Robert Mueller said he found no evidence of collusion between the 2016 Trump campaign and the Russian government —more a result of ineptitude than lack of intention — the president tried to correct that “failure” by calling the president of Ukraine to ask for “a favor.”

Unintended Consequences
Trump wanted help in destroying Joe Biden’s presidential hopes, and there are signs of damage, though not as much as the collateral damage continues to inflict on his presidency, his legacy and his party.

One of Trump’s unintended consequences has been to unify the Democrats, and Republicans have trouble recognizing what their party has become under Trump’s leadership — and their acquiescence. The GOP could become collateral damage as spineless politicians show greater loyalty to Trump than to the principles of the party that once stood for: fiscal restraint, a strong foreign policy, support for the law enforcement and intelligence communities, encouraging democracy abroad and free trade.

He succeeded in doing what dozens of Congressional Democrats had been unable to accomplish: convince Speaker Nancy Pelosi to launch impeachment proceedings. She feared moderate Democrats in swing districts could be hurt but, with the urging of a group moderates with strong military and intelligence backgrounds, the idling train has begun moving out of the station.

From Speculation To Action
In barely 10 days impeachment talk went from speculation to action.  Some in the Trump camp feel that helps them because it will mobilize Trump’s base to vote.  Others fear that it will start an avalanche of scandals, revelations, damaging leaks and defections that could sweep away the presidency and many GOP congressional candidates. Already a quarter of the Texas Republican House delegation has decided to retire, as are a growing number of other GOP lawmakers.

The Mueller investigation was about past collusion; this is about now and the next election.

Those who doubt whether Trump is a racist or an anti-Semite got an answer on the weekend of Rosh Hashanah as Trump erupted with some particularly ugly tweets. Of more than 200 Congressional Democrats supporting impeachment Trump chose to attack six — two Jews and four women of color — calling them “savages.”

Of Fraud And Treason
He also wants one of those Jews, Rep. Adam Schiff, chairman of the House Intelligence Committee, investigated for “Fraud & Treason.” His crime, says Trump, is lying about what Trump said (the “crime” was reading a parody of the president’s comments) and did in his quest for Ukraine to dig up dirt on Biden.

Of course, politicians lie. But such a charge is obscene coming from a president who has told 12,019 false or misleading statements in his first 928 days in office, according to the non-partisan Washington Post Fact Checker. That’s about 13 per day.

Trump also wants the whistleblower who exposed his phone call to the Ukrainian president to be publicly revealed and brought to the White House so he can be pressed to reveal his sources, and all can be charged with treason, a capital offense. Rep. Schiff called that an “invitation to violence.”

What Trump really wants is to stifle dissent, plug all leaks and intimidate any would-be whistleblowers. That may be good for Trump, but bad for the country.

Joseph Maguire, the acting director of National Intelligence, has said the whistleblower is an intelligence professional who acted properly in all respects and is being protected against retribution.  The whistleblower’s attorneys have said there are “certain individuals” offering a $50,000 bounty for his identity.

If anyone leaks his identity — which the president claims he doesn’t know — it could be Rep. Devin Nunes (R-Calif.), Trump’s snitch on the Intelligence Committee.  In recent hearings, Nunes said Democrats are trying to get nude pictures of Trump from the Ukrainians.

UnQuiet Desperation
The more Trump and his diehard supporters and naïve enablers like Nunes denounce the whistleblower complaint as inaccurate, the more evidence mounts to show just the opposite and reveals the desperation of Trumpsters.

Indications that Trump is becoming unhinged grew in the days since the whistleblower’s complaint went public. The more cornered he gets, the more vicious and frantic his attacks become.

He is even attacking Fox News coverage, which is akin to a cardinal attacking the Mother Church in Rome. Clashes are growing between Fox’s news division and the network’s opinion talkers, who act like Trump’s kitchen cabinet.

Shot In Foot?
In a clear incitement to violence, Trump said the impeachment investigation could lead to civil war, a threat GOP Congressman Adam Kinzinger tweeted “is beyond repugnant.”

There’s an old adage in Washington that the worst wounds are self-inflicted, and Trump is a classic case. But some credit also goes to his lawyer-fixer Rudy Giuliani. Former Republican Senator Judd Gregg said one way to impeach one’s self is to hire Rudy Giuliani to do damage control. Giuliani does more damage than control.

In his war on the First Amendment and the news media, Trump likes to dig at the Washington Post and “failing” New York Times. The unintended consequences of those attacks are growing profits and circulation for both.

Trump’s legacy will be that his reputation and self-image will be polar opposites. All those self-inflicted wounds are well deserved. What is not deserved, however, is the enormous damage he has done to the institution of the presidency and the leadership and stature of the United States. Never again should such a braggart go before world leaders and be met with derisive laughter.

Another victim is the reputation of the Department of Justice. The attorney general was once the nation’s attorney, but William Barr is acting more like another personal lawyer for Trump and his re-election campaign.  His latest is traveling overseas investigating the Mueller investigation in hopes of discrediting the FBI and CIA.

An intended consequence of the Trump presidency will be the further enrichment of Trump and his family. A high priority for the next administration, regardless of party, must be tougher rules requiring financial disclosure for aspirants to high office, including tax returns, and tightening the regulations on presidential profiteering and on family (Biden’s son, Trump’s children, all spouses and siblings) capitalizing on the presidency.

Donald Trump may survive, being impeached by the House but not removed by the Republican Senate. Whatever happens, the actions of a cornered, unstable, self-pitying and frantic president to shore up the most extreme elements in his political base will have devastating consequences for American democracy. And they are very bad news indeed for the minorities targeted by his desperate, reckless incitement. That includes a Jewish community facing the new year with justifiable anxiety about its place in the American future.

Yoram Ettinger: Yom Kippur (Day of Atonement) guide for the perplexed, 2019
Six tips on eating before the Yom Kippur fast