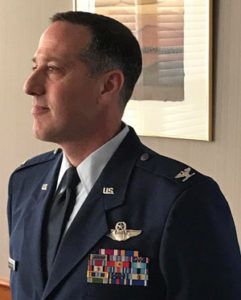 By BOB MICHAELS
“Twenty-five years of being Jewish in today’s military” was Col. Roger Shapiro’s Veterans Day topic at the Nov. 11 Gates of Heaven Brotherhood Breakfast-and-A-Speaker program. Shapiro, a decade-long Gates Member, serves in the 109th Airlift Wing at the Stratton Air National Guard Base in Scotia. He also is a part-time American Airlines pilot.

In 1993 he entered Officer Candidate School over his mother’s objections, completing a seven-week program leading to his Air National Guard commission. Shapiro told those attending the lecture that he was assigned to room with Arlen, the only other Jew in the school. He learned an important lesson from Arlen, who made himself conspicuous by wearing a camouflage yarmulke.  Arlen, he said, “had a Jewish chip on his shoulder.”  Eventually Arlen was dismissed for calling more attention to his devotion to his religion than his devotion to his Air National Guard responsibilities.

After earning his commission, Shapiro attended a flight-training program in Enid, Okla. There he was scrutinized daily for two weeks by a curious officer who outranked him, and who was 10 years older. Eventually, the officer asked Roger if he was “a member of the tribe.” The officer was also Jewish, and used his influence with higher-ups to smooth the path for his new friend. Roger and Waldo remain good friends today.

In April 2012 Shapiro was assigned to Afghanistan as director of operations at the Bagram Air Force Base, within the much larger Bagram Army Base. Bagram employed an Afghan work force. For protection against sporadic attacks, service people were required to carry a loaded firearm. Shapiro related the story of a Passover seder that was planned in honor of Jewish service people.  Its time and place injudiciously was widely announced, “creating a huge risk” of terrorist attack.  Shapiro decided not to attend.

Shapiro returned to Schenectady, where he served as a C130 pilot attached to Operation Deep Freeze. This entailed supporting Antarctic facilities, such as those run by the National Science Foundation (NSF).  From October to March, during the Antarctic summer, he flew missions with C130s equipped with landing skis to transport fuel, equipment, for the people there in temperatures rarely exceeding minus 25° Fahrenheit. Apparently, previous risks of attack by rockets, anti-aircraft fire, and terrorists were swapped for the more benign, but comparably dangerous risks of bad weather. In this new context, Shapiro related the story of another honor for Jewish service people telling how in 2014 a menorah as constructed in Antarctica, which still is in place.

Shapiro’s experience as a Jew in the Air Force for over a quarter century came across as positive overall. He left time in his presentation to elicit personal military experiences of audience members. Stories told appeared to be cathartic for some audience members. Their experiences as Jews in the  military also sounded generally positive. In response to intense audience interest and participation, Shapiro offered to arrange a tour of the Stratton Air National Guard base this coming spring.