Colonie Chai Center to open its doors on Aug. 19 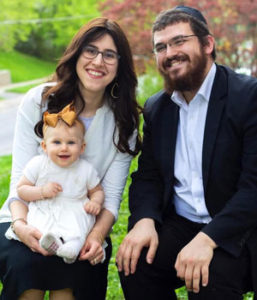 Rabbi Mordechai and Chana Rubin with their daughter Mushka.

ALBANY– Rabbi Yisroel Rubin, director of the Capital Chabad, has announced the formation of a new Chabad Lubavitch unit in the area.

Rabbi Mordechai and Chana Rubin with their daughter Mushka recently relocated to the Capital Region and have established the Chai Jewish Center, to serve Jewish families and individuals in the Town of Colonie.

“We are committed to serving Jewish people regardless of educational background or affiliation with Shabbat dinners, holiday events, Jewish Women’s Circle and children’s programs,” said Rabbi Mordechai Rubin, co-director of the Chai Center.

The couple has been presenting programs in the Colonie area for several months and recently announced the location of the center will be at 284 Osborne Rd., Loudonville. They will affix the mezuzahs at the center and hold a housewarming celebration on Sunday, Aug. 19. The program, which will include a first birthday party for the directors’ daughter, will begin at 5 p.m. and include a variety of family activities. A  bounce house  and a buffet dinner will be featured.

Rabbi Mordechai Rubin is the the youngest son of Rabbi Yisroel and Rochel Rubin who were sent by the late Lubavitcher rebbe, Rabbi Menachem Schneerson to be shluchim for this area in 1974.

Mordechai was born and raised in Albany,  and studied  at the Maimonides Hebrew Day School in Albany. He later continued  his education in Chicago, Ill., Manchester, England, and  in Brooklyn. The rabbi  has taught Talmud and Chasidic philosophy and served as an editor for  the Talmudic Journal at the Rabbinical College in Melbourne, Australia. He completed his rabbinic ordination at the Central Yeshiva Tomchei Tmimim Lubavitz in Brooklyn. After marrying Chana, he continued his studies at the kolel for advanced rabbinics before moving to back to this region in October of 2017.

Chana Rubin grew up in Brooklyn, where her father, Rabbi Yossi Paltiel, teaches at the Central Lubavitch Yeshiva. After graduating from Beth Rivka Schools of Brooklyn, she spent a year in Israel studying  at the Beth Chana Teachers Seminary in Tzfat. Chana Rubin has dedicated two years working with special education and taught several years of Hebrew school. She has created a curriculum for Jewish studies that is used by children around the country.

Rabbi Mordechai and  Chana Rubin married in New York in 2016, and have one daughter, Mushka.

Information about programs may be obtained by contacting Chana Rubin, ChaiCenterColonie@gmail.com or 518-368-7886.

Beth Emeth’s TRG holds Torah study at Tanglewood with Cantor Jodi Schechtman
Is the kotel a safe place to pray?