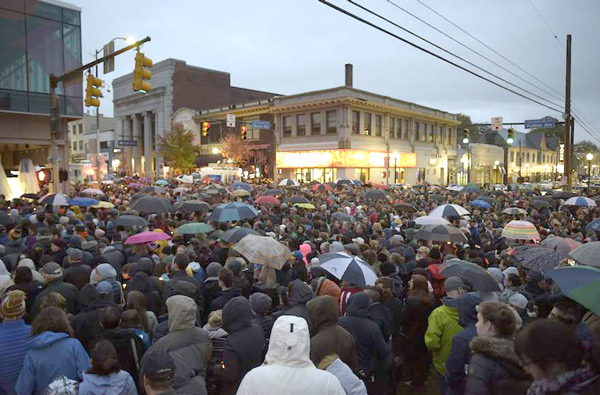 Members of the Squirrel Hill community in Pittsburgh come together for a student-organized candle vigil in remembrance of those who died earlier in the day during a shooting at the Tree of Life Synagogue, Oct. 27, 2018. Photo courtesy Dustin Franz/AFP/Getty Images.

BY RON KAMPEAS
PITTSBURGH (JTA) – It is after all, as any local will tell you, Mr. Rogers’ neighborhood. People here look out for one another.

So when a group of students from Alderdice, a high school in the Squirrel Hill neighborhood of Pittsburgh, emerged from their synagogues, their homes, their cafes after three and a half hours of sheltering in place, they knew what to do. The texts flew out: Meet at Starbucks.

Sophia Levin, 15, said the network was in place since May, when a group of Alderdice students organized a walkout in solidarity with the one organized by the students at Marjory Stoneman Douglas High School in Parkland, Fla., the last time a mass killing gripped the nation’s attention.

The students, mostly girls, decided a havdalah ceremony, marking the separation of the holy Sabbath from the rest of the week, would be the best representation of their feelings. Word went out, and by 5:30 p.m. there were thousands of people, Jews and non-Jews, packed into the intersection of Forbes Avenue and Murray Avenue, just feet away from the Pittsburgh Jewish Community Center, in the heart of the Jewish community.

Ask the locals about the late Fred Rogers, and they’ll smile and point toward where the 20th-century icon of gentle, takes-a-village children’s television spent most of his life. Then the smile disappears, a block or so away from The Tree of Life Congregation. There a gunman who shouted out that he was determined to kill Jews murdered 11 people on Saturday morning during a brit milah, before a SWAT team arrested him.

The havadalah vigil took place at a sundown, hours after the shooting and even before any of the victims’ names had been released.

“I take care of some of the members of this community,” said Katie Brinton, a nurse who is not Jewish. “I went to Jewish community summer camps.”

She came to the vigil with her husband, Tristan Palazzolo, and their toddler son, Marin.

“I’m lucky to live here,” she said. “This is a wonderful place.”

But was she surprised? No.

“There is Nazism and anti-Semitism here,” she said, referring to the racist and-anti-Semitic killing spree carried out by Richard Baumhammers in this city in 2000. Baumhammers killed five people, including his Jewish neighbor, and shot up a synagogue.

“I’ve never been in denial. But it’s never been this close,” Brinton said.

That tension, between the defiance of a small, diverse community where neighbors become friends for life, and the realization that beyond its tree-lined streets and row houses an anger lurks and is metastasizing, was as stark during the vigil as the separation marked by the havdalah ceremony, which ends Shabbat.

Andy Gespass, 63, a lawyer, watched his wife, Debbie, give directions over the phone to friends. “We’re at the zebra crossing,” she said. “Are they coming?” he said, as casually as someone awaiting a dinner date.

“We’re waiting for them to publish the names,” he said, referring to the 11 dead, and that was an oft-heard claim throughout the crowd. “I’m sure we’re going to know people,” his wife said.

“It’s all the vitriol piling up,” Andy Gespass said, referring to the political climate. “I think it’s gotten worse and worse.”

For many in the crowd, the shooting seemed of a piece with recent horrors: The 13 pipe bombs that a Florida man, obsessed with President Donald Trump’s enemies, had sent to leading liberals and Democrats; the Parkland shootings; the deadly neo-Nazi march in Charlottesville, Virginia in 2017; the man in Kentucky who killed two blacks at a Kroger and tried to enter a black church.

“We usually don’t get that in Squirrel Hill,” said Tamara Bizyayev, a nurse who came to the vigil with her husband, Alex Kosheni. “God is the center of the town,” she said, and pointed her chin at the church that stood hard by the Jewish community center.

“There are at least five synagogues, walking distance,” said Kosheni, a medical interpreter.

There were similar vigils Saturday night across the country, non-Jews coming together with Jews to express solidarity.

“I come to you with a very heavy heart broken in a million pieces based on what happened today,” Debbie Almontaser of the Muslim Community Network-NY said at a vigil in Union Square in Manhattan organized by Jews for Racial and Economic Justice.

In Squirrel Hill, the Jews in the crowd began to sing, softly: traditional psalms and prayers, like “Oseh Shalom,” the maker of peace; “Gesher Tzar Meod,” a very narrow bridge; and “Hineh Ma Tov uMah Naim,” how good and pleasant it is for brothers and sisters to come together. A mild rain drizzled, and umbrellas went up.

Before the havdalah prayer, the student organizers spoke.

“A man who is so hateful and anti-Semitic should never have able to get his hands on a gun,” said Cody Murphy, 17. “This man was a Nazi and he took 11 lives because they are Jewish. We are allowed to be angry.”

From left: Tammy Hepps, Kate Rothstein and her daughter, Simone Rothstein, 16, pray a block away from the site of a mass shooting at the Tree of Life Congregation in the Squirrel Hill neighborhood of Pittsburgh, Oct. 27, 2018. (Jeff Swensen/Getty Images)

Sophia Levin, tiny, hesitant, wearing a woolen hat to fend off the chill, stood before the mic.

“Today I am a different Jew,” she said. “Tree of Life used to be the synagogue my grandparents went to, that we went to on High Holidays, that was so much fun … Tree of Life will never be the same.”

Simone Rothstein, described sheltering that morning in the sanctuary at Beth Shalom, a nearby synagogue, where she attends services each week, and calming her sobbing eight-year-old sister.

“Are they coming here?” she remembered thinking. In an interview afterward, Rothstein face crumpled. She was torn about describing her day for the crowd, for a reporter. What if it gave another bad man ideas? ”

It doesn’t feel good that you can’t talk about your synagogue,” she said.

A woman led the crowd in the Mi SheBeirach, the prayer wishing the ailing recovery, and then the havdalah prayer. Those in the crowd, Jews and non-Jews, who came with candles lit them and the scent of burning wax filled the intersection. They sang along with a tinny recording of Jewish rapper Matisyahu singing his prayer for a world without violence, “One Day.”

Then it was done.

Was the event a success, a reporter asked Sophia Levin.

“It strengthened our community,” she said. “The most important part of Judaism for me is a sense of community.”