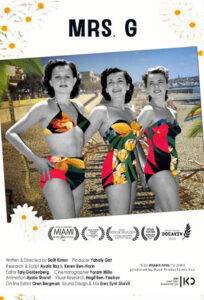 SARATOGA SPRINGS–Congregation Shaara Tfille and The Jewish Community Center of Saratoga Springs will live stream an Israeli documentary “Mrs. G.” on Wednesday, Aug. 19, at 7 p.m.   It is a about the Israeli creator of the swimsuit company Gottex, Lea Gottlieb

Gottlieb started the company in her tiny Tel Aviv apartment and then established a small factory in Israel. The documentary follows Gottlieb’s creativity, and what some have termed a larger-than-life character. She spent her fortune extravagantly and lived her life like there was no tomorrow—often at the expense of those closest to her. Ultimately, her unyielding professional vision and unbridled passion, led to complex relationships with her two daughters, who both worked for the family business.

Open to the entire community, those who would like to view the movie are asked to e–mail likebertrand518@gmail.com to obtain the live streaming link.

Beth Emeth to host conversation about racism
‘Stockholm’ is next film in Schenectady Center lineup; Dr. James Strosberg to discuss on Aug. 23