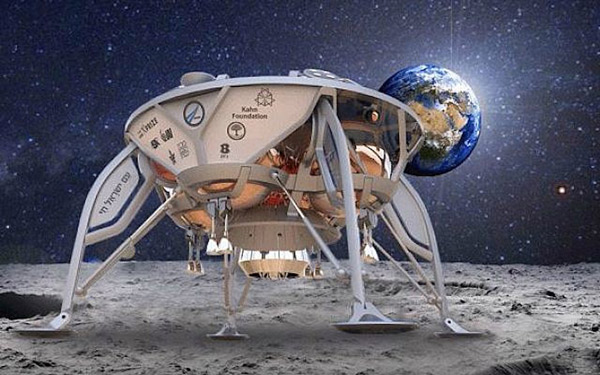 By ISRAEL KASNETT
(JNS) – “Houston, the Eagle has landed” will soon be a common refrain for Israelis.

While famed entrepreneur Elon Musk sent one of his Tesla cars into space last year on top of his SpaceX rocket, this year, Musk will help deliver Israel’s first unmanned lunar spacecraft atop a SpaceX Falcon 9 rocket, where it will assume a course that will take it to its final destination: the moon.

At a recent press conference at defense contractor Israel Aerospace Industries facilities, Israeli nonprofit company SpaceIL announced its intention to send Israel’s first unmanned spacecraft into orbit in December, and two months later, land it on the lunar surface. Israel would then join the exclusive club of nations that has accomplished this feat since the 1960s, becoming the fourth nation to land a craft on the moon after Russia, the United States and China.

Compact, But Sophisticated!
Ido Anteby, chief executive of SpaceIL, outlined the schedule. He explained that SpaceIL will test the spacecraft through October, and in November, the company will deliver it to the Cape Canaveral launch site in Florida. The launch date is set for December; two months later, on Feb. 13, the spacecraft is expected to land on the moon.

“It’s a very compact spacecraft,” says Anteby. “We worked together with the IAI team and SpaceIL team on very sophisticated engineering to get [it] all the way to the moon.”

Funding?
Kahn, the entrepreneur, said  that costs associated with the program hover around $95 million. He emphasized that he will underwrite any gaps in funding, saying, “this project will not stop, will not have any problem, because of money.”

He also called on the Israeli government to follow through with its pledge to fund 10 percent of the project. 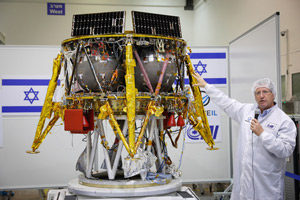 Ofer Doron, head of IAI’s MBT Space Division speaks near the Israeli spacecraft of the SpaceIL team’s spacecraft, during a press conference at the Israel Aerospace facility in Yahud on July 10, 2018. Photo by Flash90

Importance Of Space
“When the rocket goes into orbit,” Kahn said, “I think we will all remember where we were when Israel landed on the moon.”

“Space is going to be very important to the future,” he added.

An 8-Week Mission
The entire journey, from launch to landing, is expected to last about eight weeks.

In addition to taking photos on the surface of the moon, the spacecraft will measure its magnetic field at the landing site, using a magnetometer installed on it. The measurements are intended for research conducted at the Weizmann Institute of Science-UCLA.

Once it completes its mission, the spacecraft will remain on the moon, displaying the flag of the State of Israel.

SpaceIL’s spacecraft is not only small—it measures 2 meters-by-1.5 meters and weighs 600 kilograms (1,323 pounds)—but also significantly less expensive than those usually launched into deep space. This will be the smallest spacecraft to land on the moon.

That’s one small achievement for the world, but one giant leap for Israel.