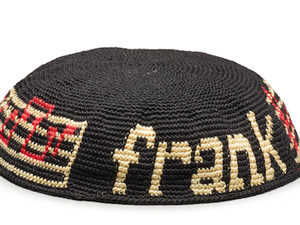 A yarmulke that belonged to the late singer Frank Sinatra sold at auction for close to $10,000. Photo courtesy of Sotheby’s.

NEW YORK CITY (JTA) — A hand-crocheted yarmulke that once belonged to Frank Sinatra sold at auction for nearly $10,000.

The black kippah, with musical notes and “Frank” decorating its border, was auctioned off by Sotheby’s on Dec. 6 in New York City as part its sale of items belonging to the estate of the singer’s late wife, Barbara.

The catalogue did not indicate who made the kippah or gave it to Sinatra, although it does note that he was “a lifelong sympathizer with Jewish causes.”