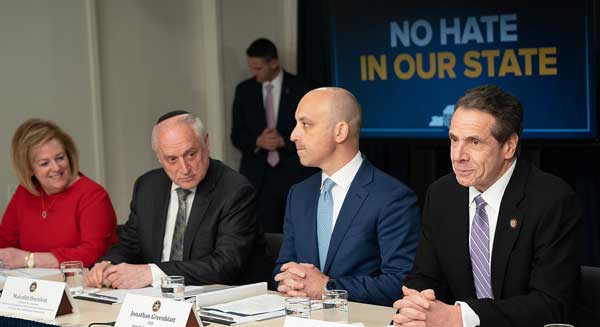 By FAYGIE HOLT
(JNS) – New York Gov. Andrew Cuomo announced several steps on Thursday aimed at providing safety, security and peace of mind to Jews and other minorities in the state as the number of hate crimes continue to swell nationwide.

Under the umbrella of “No Hate in Our State,” the governor proposed legislation that would label hate crimes as domestic terrorism. People convicted of hate crimes could be sentenced to life in prison. If New York passes the law, it will be the first state in the country to equate the two.

The governor also proposed spending an additional $25 million for the security of “religious and nonreligious not-for-profit organizations that are vulnerable to hate crimes, and will expand the eligibility criteria to include houses of worship.” That allocation would be in addition to an already allocated $45 million available through the state’s “Securing Communities Against Hate Crimes Grant Program.”

The “No Hate in Our State” initiative comes after more than 40 anti-Semitic incidents occurred in New York in the past few months. Those incidents include an attack in December during Chanukah at the home of a rabbi in Monsey, N.Y., in which a man with a machete stabbed and injured five people. There is a “virus” of hate in America, stated Cuomo, acknowledging that “I thought New York would be immune from it.”

“This issue has caused me great personal pain,” said the governor, who has two Jewish brothers-in-law. “I apologize to the Jewish community of this state that they had to go through this.”

His remarks followed a meeting with the leaders of a number of Jewish groups, including the Orthodox Union, Jewish Community Relations Council, United Jewish Appeal of New York, Anti-Defamation League, American Jewish Committee, Conference of Presidents of Major American Jewish Organizations and Agudath Israel of America.

“Governor Cuomo is leading the way toward a safer future for all communities with serious pragmatic and inspiring security proposals that will continue to make New York a leader in safeguarding all communities,” said Allen Fagin, executive vice president of the Orthodox Union.

‘Stand up against hate and divisiveness’
“As we navigate these challenging times, [the governor] has shown leadership for the State of New York,” said Betty Ehrenberg, executive director of the World Jewish Congress North America. “The significant actions he has taken to stand up against hate and divisiveness serve as an important example for how these issues are handled. We thank him for his work and will continue to stand with him against the forces working to drive us apart.”

With more than 300 incidents of anti-Semitism in New York City alone in 2019, Jonathan Greenblatt, CEO and national director of the Anti-Defamation League, said, “We have a pandemic of prejudice right here in the Empire State.”

The governor’s proposal also sets aside additional funding for the New York State Police Hate Crimes Task Force, calls for the expansion of the Museum of Jewish Heritage: A Living Memorial to the Holocaust in Lower Manhattan, as well as suggests additional civics and diversity training for New York schoolchildren.

“As hate crimes continue to rise at a rate that we have never seen, New York has been more proactive than any other state in investigating these crimes and bringing these criminals to justice,” said Sol Werdiger, Agudath Israel’s chairman of the board of trustees. “The State Police Hate Crimes Task Force has been essential in reassuring the public that no hatemonger will get away with these despicable acts.”

Cuomo, who unveiled his program online, hopes to have the legislation approved by April 1.