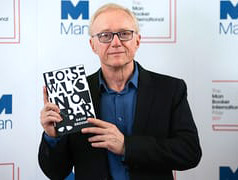 JERUSALEM (JTA) – Author David Grossman has been named the winner of the 2018 Israel Prize for Literature.

“Since the early ’80s, Grossman has taken center stage in the Israeli culture scene. He is one of the most profound, moving and influential voices in our literature,” the prize committee wrote.

The Israel Prize is awarded each year in a  public ceremony on Independence Day.

Grossman, 63, is the author of more than 17 books of fiction and nonfiction, including “See Under: Love” and “To the End of the Land.” His novel “A Horse Walks Into a Bar,” about the day in the life of a failing Israeli standup comedian, won the 2017 Man Booker Prize.

Grossman is a left-wing peace activist, and his political leanings come through in his writing. His son Uri was killed in the 2006 Lebanon War between Israel and Hezbollah when the tank he was commanding was struck by a rocket.

In a statement after announcing the prize, Israel’s education minister, Naftali Bennett, called Grossman “one of the most moving, profound and influential voices in Israeli literature. With great wisdom, human sensitivity and a unique language he became a world-renowned author.” Bennett acknowledged Gross’ left-wing politics, adding that “no dispute — as harsh as it may be — can take away from the magic of his books.”

“In his writing, Grossman has honored all of Israel, not just one political camp,” Bennett said.