DC Report: A tale of two speeches—sound and fury, what do they signify?

DC Report
By Douglas Bloomfield
Listening to a pair of speeches by President Donald Trump you would get the impression that the Second Amendment was etched in stone on Mt. Sinai, but that the First Amendment is just a suggestion and may no longer be relevant.

He didn’t say anything he hadn’t said many times before, but marking his first 100 days in office these speeches —laced with hate, bigotry, fear mongering racism and lies—presented a frightening picture of his vision for America.

If Trump —and NRA —get their way, concealed carry permits issued by any state must be honored in all states. That means you can pack heat in schools, hospitals, churches, stadiums, theaters, restaurants and bars. I especially like that last one because no one ever gets into drunken fights in bars.

If that wasn’t scary enough he topped himself the next night at a campaign-style rally in Harrisburg, Penn. Michael Gerson, a former top advisor to President George W. Bush, called it  “arguably the most hate-filled presidential communication in modern history.”

Contempt For Media
Trump scheduled his Harrisburg rally less to celebrate his 100 days than to show his contempt for the media by upstaging the White House Press Association (WHPA) annual dinner that evening. He was the first president since Ronald Reagan — who was recovering from an assassination attempt —to miss the event.

It was more than a show of contempt, it was also an act of cowardice. He recalled how he was roasted by Barack Obama in 2011 and wasn’t about to risk a repeat. It is no secret that Trump is very thin skinned; he can dish it out but he can’t take it.

Trump, in the tradition of Richard Nixon, has declared the media “the enemy of the American people.”

Columnist E.J. Dionne said Bernstein and his partner Bob Woodward were there as if to say that under the right circumstances journalists can topple a presidency.

Is First Amendment Passé?
Throughout his campaign and into his presidency, Trump has viciously attacked the media and talked about changing the libel laws. He can’t do it unilaterally but with a reactionary attorney 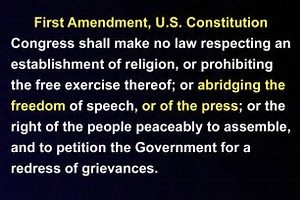 general like Jeff Sessions, alt-right conservatives in Congress and his like-minded electoral base he could begin a costly and dangerous campaign of litigation and harassment.

One tactic Trump is considering is amending or even abolishing the First Amendment. If you haven’t read it recently it says:

Congress shall make no law respecting an establishment of religion, or prohibiting the free exercise thereof; or abridging the freedom of speech, or of the press; or the right of the people peaceably to assemble, and to petition the Government for a redress of grievances.

These 45 words are the essence of the freedoms that make America so exceptional. Without them the Constitution would not have been ratified. But Donald Trump seems to feel they’ve outlived their usefulness. Apparently they get under his thin skin and in the way of his extreme, self-serving agenda.

Litigious Agenda
White House Chief of Staff Reince Priebus told ABC’s Jonathan Karl that the White House is considering amending or even abolishing the First Amendment because of critical press coverage of President Trump.  “It’s something we’ve looked at,” Priebus said, in order to make newspapers and news agencies “more responsible” in reporting on Trump.  What he really means is reporting must be more sycophantic and obsequious.

Trump wants to be able to sue any news outlet that says something about him that he doesn’t like. He has a long, litigious history, boasting he never loses (he does, but denies it) because he has the money to tie up critics, competitors and others in costly litigation that could put them out of business. Until now he had the power of his own vast wealth; with the constitutional changes he seeks he would have the enormous wealth and power of the federal government to harass and destroy his critics.

Rep. Ted Lieu (R-Calif.) said Priebus’ proposal to loosen libel laws or even remove First Amendment “is marching America down the road to authoritarianism.”  Republicans should be as worried as Democrats.

Dangers
Short of starting a nuclear war —which he is also threatening —this is the most dangerous thing Trump could do to the survival of American democracy.

Trump’s attacks on the media resonate with his alienated base, but also are motivated by a hope that journalists can be weakened and intimidated into reporting only what he wants. While he publicly attacks and demonizes the press, privately he and his top officials assiduously court the same reporters to get their spin and their story out before the public.

He could learn from Nixon, who found the more aggressively he attacked reporters the more he energized them to find what he was hiding. Both presidents are characterized by paranoia, ego insecurity and an allergy to truth telling.

Sedition Act Repealed
Trump may not be able to repeal the First Amendment but he may try to take a page from John Adams and the Federalists. Wanting to stifle pro-Jefferson newspapers they passed the Sedition Act of 1798, making it a crime to publish false, malicious comments about the president or the Congress.

They wound up throwing some pro-Jefferson editors in jail but their repugnant law was a major reason Adams was a one-term president. The law was removed after the election of Jefferson, who famously wrote:

Were it left to me to decide whether we should have a government without newspapers, or newspapers without a government, I should not hesitate a moment to prefer the latter.

If Trump were a student of history, he might have known that.