DC Report
By Douglas Bloomfield
As the late Democratic congressman, John Lewis, known as the conscience of the House of Representatives, crossed the Edmund Pettis Bridge in Selma, Ala., on his way lying in state in the U.S. Capitol, one of his colleagues across the aisle was cementing his own very different reputation: the stupidest member of Congress.

There’s a lot of competition for that title, but the winner is Rep. Louie Gohmert. Numerous denizens of Capitol Hill have bestowed that moniker on the seven-term Texas Republican; another is the “most obnoxious Republican member of Congress.” Leader of the Lunatic Fringe would be appropriate in light of his long record.

Lewis, a civil rights icon, died July 17, at 80 following more than six decades as a leader in the fight for racial justice, equality and human rights. This week House Democrats introduced the John Lewis Voting Rights Act to restore and strengthen protection of that 1965 law.

Seeks To Ban Democrats
You can bet that Gohmert, whose latest stunt is to try to portray himself as a defender of African-Americans against those pro-slavery racist Democrats, will vote against it. Gohmert has announced he will be introducing legislation of his own— to ban the Democratic Party from the Congress because its name is “blatantly and offensively tied to slavery.”

This from one of only four House members to vote against making lynching a federal hate crime and who opposes removing statues and other honors for traitors who waged war against the United States to preserve slavery. At the same time, the aptly named Sen. Tom Cotton (R-Ark) called slavery a “necessary evil” and its origins in U.S. history an inappropriate topic for teaching “in our public schools.”

You have to wonder what side some of these guys would have been on in 1861.

Dems, GOP Switch Roles?
To be fair, the Democratic Party once supported slavery prior to the Civil War, and the new Republican Party led by Abraham Lincoln was opposed. But those two parties bear little resemblance to their modern counterparts. That is clearly visible in the dearth of support among the descendants of slaves for the party of Lincoln. Today more than 90 percent of African-Americans vote Democratic, and there is only one black Republican senator and one black congressman in the 116th Congress, and the latter is retiring this year.

African Americans, like Jews, left the party of Lincoln in the Thirties with the election of FDR, although the Democratic Party was still dominated by the segregationist southerners like Howard Smith, James Eastland, J. William Fulbright, John Stennis, Richard Russell and Harry Byrd.

In 1948 Governor (and later senator) Strom Thurmond of South Carolina broke with the Democrats to form the Dixiecrats, opposing Harry Truman’s support for civil rights and his decision to integrate the U.S. Armed Forces. He became a Republican in 1964.

That year marked a seminal shift in the two parties with the Civil Rights Movement. President Lyndon B. Johnson was warned that if he signed the 1964 Civil Rights act and the 1965 Voting Rights Act he would be writing off the South for the Democratic Party. That prediction came true and paved the way for the election of Republican Richard M. Nixon in 1968. Nixon called his base the “silent majority,” which to many meant white Democratic refugees unhappy with their party’s embrace of civil rights.

As a result, today’s Democrats are the real heirs of Lincoln and the GOP, as voting patterns and congressional representation show, is the party of the white South.

Legacy Of Lincoln
The GOP base increasingly includes white supremacists as well as neo-Nazis and extreme xenophobes.

President Trump’s defense of the Confederate flag, a symbol of hate for African-Americans and millions of others, and his defense of treasonous generals and his attacks on minorities stand 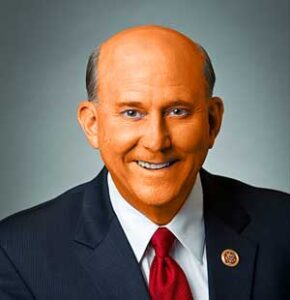 in stark opposition to everything Lincoln stood for.

Calling the Stars and Bars merely a symbol of free speech, as Trump does, suggests he’d feel the same way about flags with the swastika carried by those “fine people” he saw at racist demonstrations in Charlottesville in 2017, shouting “Jews will not replace us.”

Despite their professed support for Israel, anti-Semitism permeates the new GOP base. It’s, and Trump’s, favorite target is Jewish Holocaust survivor, philanthropist and supporter of liberal causes, George Soros. Gohmert has charged the Hungarian-born Soros “turned on his fellow Jews” during the Holocaust, even though he was a child. That was echoed by Rep. Paul Gosar (R-Ariz.), who said Soros “turned in his own people to the Nazis.”

Trump and acolytes like Gohmert have made Soros today’s go-to scapegoat, falsely accusing him of financing the phantom “caravans” toward the southern border, being behind the opposition to Brett Kavanaugh’s Supreme Court nomination, bankrolling the Black Lives Matter protesters, being a globalist (often a buzzword for Jew) and soft on crime.

Cosponsors Of Bill
Gohmert’s record qualifies him to be declared the chairman of the Lunatic Fringe Caucus. Members include cosponsors of his bill to remove the Democrats, Reps. Andy Biggs of Arizona, Jody Hice of Georgia, Randy Webber of Texas and Andy Harris of Maryland.

Biggs, as president of the Arizona Senate, sat silent when an anti-government militia leader called for lynching Sen. John McCain, calling the war hero “every bit as nuts as Adolf Hitler was.”

Rep. Scott DesJarlais (R-Tenn.) is the staunchly anti-abortion family doctor who urged, according to his ex-wife and a patient with whom he had an affair, to abort their pregnancies.

Misunderstood Or Crackpots?
Gohmert’s qualifications for leadership were made evident when he said Attorney General Eric Holder had questioned his integrity and “cast aspersions on my asparagus.”  His other qualifications include comparing homosexuality to bestiality, endorsing a column likening the Obama administration to the Third Reich, saying the Sandy Hook schools shootings could have been avoided if the teachers had been armed, accusing a top Hillary Clinton aide of being part of a Muslim extremist conspiracy and saying Middle East extremists were recruiting pregnant women so they could give birth to U.S. citizen “terror babies” who would grow up to be home grown terrorists. His constitutional law professor at Baylor Law School, David Guinn, told the Texas Tribune “He was about 32 degrees to the right of Attila the Hun.”

Don’t get me wrong. Democrats have their share of crackpots, lunatics and numbskulls. But in fairness, they can’t match Louie Gohmert and his merry band. The member’s rantings would be funny if they, by virtue of their respected place in Trump’s GOP, didn’t represent such a dire threat to the constitution and to every minority that depends on it for their protection — including the Jews.