DC Report: If its all about the voters, the president needs to say: ‘You’re fired!’

DC Report
By Douglas Bloomfield
If Donald Trump is being truthful when he says he doesn’t want war with Iran, and I for one believe him, he needs to fire his chief warmongers, John Bolton and Mike Pompeo, before they push the launch buttons. While he’s at it, he should consider sending calls from his pals Benjamin Netanyahu and Muhammad bin Salman to voicemail— for a while. That became clearer than ever with his recent last-minute decision aborting a military strike against the Tehran regime.

Netanyahu and MBS, the Middle East’s newest odd couple, have been trying to goad their friend in the White House to bloody Iranian noses since before he took office, although neither one seems to realize consequences for his own country.

Warfare By Proxy
You don’t need a degree from Trump University to know Iran fights asymmetrical warfare by proxy, and the ayatollahs will not sit by silently when Trump sends salvos of Tomahawks their way as Bashar Assad did 14 months ago.

They can mobilize Shiite militias in Iraq and Syria, Hezbollah in Iran, Hamas in Gaza and hundreds more clients around the Middle East and beyond. Iran would be maintain some degree of deniability by farming out the attacks to its clients and not sending its own forces to directly take on the Americans.

Iran’s target lists include tens of thousands of American troops and civilians on over a dozen bases scattered throughout the region, plus the Fifth Fleet with thousands more personnel sailing the Persian Gulf, and add to that a slew of American business interests and more.

The most powerful of those proxies is Hezbollah, the Shiite terrorist organization that controls Lebanon and has an arsenal of thousands of Iranian-supplied missiles that can hit any spot in Israel. Its targets might not be limited to Israel but Israeli and Jewish interests abroad as well. The Saudis, the Emirates and other US allies, with their oil wells facing Iran, are highly vulnerable to sabotage and attacks.

Fears Of A Forever War
Bolton, the national security advisor, and Secretary of State Pompeo have long histories of pushing for war and regime change in Iran. Trump has privately complained that the pair “want to push us into war, and it’s so 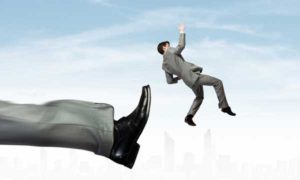 Time to give some folks the boot? Image courtesy of Sergey Nevins, Canstock, www.canstockphoto.com

disgusting,” according to the Wall Street Journal.  “We don’t need any more wars.”

This is a battle for Trump’s soul between his isolationist electoral base and war mongering advisors looking for Tonkin Gulf II.

Democratic presidential hopeful Sen. Elizabeth Warren seemed to be speaking for —and certainly to —Trump’s base when she said, “We can’t afford another forever war.

The Blame Game
Speaking of Democratic ghosts haunting Trump, here’s another that will infuriate him: his vow to use all means necessary to make sure Iran never gets a nuclear weapon was Barack Obama’s position as well.

One difference, of course, is Iran is unlikely to sign any agreements with a president who boasts about ripping up previous accords. They feel his word is worthless and see his calls for negotiations as a sign of weakness. What country would want to negotiate with another whose leader takes pride in breaking promises?

True to form, Trump tweeted that the entire crisis with Iran is Obama’s fault for signing the nuclear agreement in the first place, and that he’s just applying “maximum pressure” to get a better deal. It seems a bit disingenuous for Trump to accuse Iran of violating an agreement he tore up.

Netanyahu was one of those who pressed Trump to abrogate the agreement.  In the past he had (reportedly) wanted to unilaterally attack Iran’s nuclear facilities but was dissuaded by his military and intelligence chiefs.

For all his sabre rattling, the last thing Israel needs right now is a United States attack on Iran because the Jewish state would be a top target for retaliation.  Besides, Netanyahu is busy waging the two toughest battles of his political career— staying out of prison and keeping his day job.  He is telling voters to re-elect him because he kept them out of war (Woodrow Wilson ran for re-election on that theme in 1916 and was at war one month after his inauguration).

He also knows that casualty-sensitive Israeli voters are likely to blame him for their losses regardless of the outcome, observed Yossi Alpher, a former Mossad official.

Disappointed Hawks
After Trump called off the attack (if it wasn’t just a bluff all along), Bolton and Pompeo flew off to Israel and Saudi Arabia, respectively, where they would find more sympathetic leaders than their own.

Another disappointed hawk is former Sen. Joe Lieberman, who told Israeli Army Radio he was “troubled” by Trump’s decision to call off the attack and he spoke of the need to “strike targets that are visible and public.”

That view is shared by Arkansas Sen. Tom Cotton, who said Iran can be brought to heel with only two strikes, “the first and the last.” Another uber-hawk is Rep. Liz Cheney (R-Wyoming), now third in the House GOP leadership.  Her father, former Vice President Dick Cheney, had goaded President George W. Bush to war in Iraq with phony intel about Saddam Hussein’s weapons of mass destruction.

Real Compassion?
One of Trump’s versions of what happened Thursday, June 20, was that the planes were on their way to “sights” (the self-anointed stable genius is a poor speller) in Iran when he suddenly asked about possible casualties. He said he called off the attack over concern of possibly killing 150 Iranians. That’s hard to believe. If he really cared about killing innocents he wouldn’t be letting hundreds of immigrant children live in squalor and even die at his detention camps on the southern border.

Pulling Trump back from the brink this time may have been the threat of retaliation not by Iran but by his isolationist base who were promised no new wars, especially in the Middle East. More frightening than Iranian missiles for Trump is the threat that his voters could desert him on Nov. 3, 2020.

If he really wants to please them and to shrink America’s global military footprint, it’s time to call in the uber hawks and bring back the catchphrase of his television show, The Apprentice.  You’re fired.

Lecturer at AJCC to review the history of finances of U.S. congregations
AIPAC and J Street support bipartisan effort to restore funds for Israeli-Palestinian peace dialogue