DC Report: Israel — has it beome a diminished democracy?

DC Report
By Douglas Bloomfield
A cornerstone of Israel’s support in America stands on the values it shares with this country, starting with its vibrant democracy. Nowhere in the entire Middle East has there been anything like it. The Jewish state was the only place where Arabs could vote in free and fair elections, enjoy freedom of speech and equal treatment for women.

As a lobbyist, congressional staffer, journalist and community activist for nearly half a century, I worked to spread that message about Israel’s robust democracy and readiness to take risks for peace. Today, both are in doubt, particularly among Israel’s Jewish friends, who care most deeply about such things.

It may seem odd to question the quality of Israeli democracy in the days following the country’s third national election in less than a year, and one in which Israeli Arabs voted in greater number than ever.

Disenfranchised Voters?
But that is a serious cause for concern. Prime Minister Benjamin Netanyahu is seeking a record fifth term and is desperate to hold on to office because very soon he goes on trial for fraud, corruption and breach of trust. He has so far failed to get Knesset to grant him immunity, and his political foes are preparing to vote to bar anyone under criminal indictment from becoming prime minister.

Not surprisingly, Netanyahu charges such a ban “goes against the most basic principles of democracy.”

Yet he has given seats in his Cabinet to anti-democratic religious and nationalist extremists and even tried to lure the disciples of the racists Rabbi Meir Kahane into the Knesset in exchange for their backing.

To avoid having to move out of the government housing on Balfour Street in Jerusalem for more confined quarters at Maasiyahu prison, a frantic Netanyahu is essentially trying to 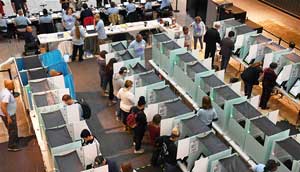 disenfranchise 20 percent of Israel’s citizens by insisting that only “Zionist” – Jewish—votes count in forming a government.

He claimed victory based solely on “Zionist” votes, declaring “Arabs are not a part of the equation.” He accused his opponent of “trying to steal the election” and “annul the decision of the people” by dealing with the Joint List.

Joint List’s 15 Seats
Netanyahu said the Joint List “opposes the existence of the State of Israel as a Jewish and democratic state,” conveniently ignoring that by disenfranchising them it would no longer be democratic.

Israeli political parties of all stripes campaign for Arab votes and conveniently forget all their promises when the polls close. In one election, Netanyahu rallied his supporters to rush out to vote because the Arabs were going to the polls in “droves.”

Israeli Arab parties ran together as the Joint List, winning 15 seats, out of 120, making them the third largest component in Knesset. They can hold the balance of power since Netanyahu’s right-wing Likud-led faction got only 58 mandates and the centrists led by the Blue and White Party got 40 but could form a government by partnering with the right-wing Yisrael Beitenu Party with seven and the Joint List’s 15.

The Joint List would support the government from the outside—not as part of the governing coalition – and that has Netanyahu and his followers fuming. Arab parties did that once before, in 1992, backing Yitzhak Rabin.

Veiled Threat
Non-Jewish votes should not count, declared Netanyahu, because the Arab parties include “supporters of terrorism and slanderers of IDF soldiers.” A government led by Bennie Gantz, head of the Blue and White and a former IDF chief of staff, would be illegitimate, subversive and a threat to national security, Netanyahu charged. “Millions of Israelis” will take to the streets to “not let this happen.”

So much for the only democracy in the Middle East.

That veiled threat to violence is a reminder of Rabin’s murder and is being taken very seriously. Gantz’ security protection has been beefed up in response to threats in social media and amid growing fear that if Gantz forms government with backing of the Arab Joint List and without the ultra-religious parties, the right wing could launch civil war.

Ganz Responds
“Netanyahu and his people are intentionally fueling violent and extreme discourse,” Gantz said, as reported in the Times of Israel. “Netanyahu is ignoring the election results and is prepared to burn everything on his way to avoiding trial.”

Religious intolerance is another sign of diminished democracy. Israel’s ultra-religious establishment has disproportionate influence and leans more toward theocracy than democracy.

Freedom Of Religion
American Jews have far more freedom to practice their religion than Israeli Jews. If you’re Jewish and want to live in a country that respects all streams of your religion, lets you practice your religion as you see fit, doesn’t place any restrictions on doing business, going to the movies, riding a bus, shopping for food, who you can marry, where you can be buried— Israel is not for you.

The religious establishment’s persistent abuse of power is abetted by spineless politicians of the secular parties at the highest levels who dip into the treasury to buy their votes and award them far more control over Israeli society than their numbers merit. The head of one religious party went to prison for corruption while minister of the interior, and when he got out, he was appointed by Netanyahu to his old job, where police have recommended indicting him for fraud, money laundering and other charges.

Corruption is an all-too-common problem in Israeli government. Netanyahu may end his term the same way his predecessor, former prime minister Ehud Olmert, did, in prison. Others convicted recently — many sent to jail—include a former president, two former chief rabbis and assorted Cabinet ministers on charges of corruption, rape, drug smuggling and one spying for Iran.

If Gantz does form a government and Netanyahu leaves Knesset, there is widespread speculation that the new prime minister may try to form a unity government with the Likud. Will he deliver on his promises to the Arab parties that helped put him in office, or will it be business as usual in a democracy for Zionists only?