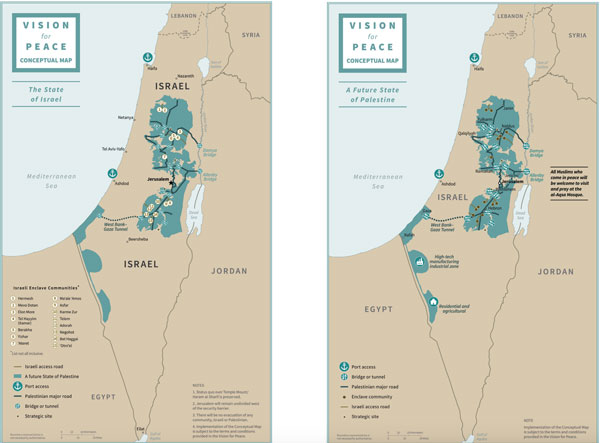 Donald Trump’s peace plan includes two detailed maps of what a two-state solution could look like. Screenshots from WhiteHouse.gov.

Israel’s annexation vote set for 7/1; new unity government considers U.S. elections
Benjamin Netanyahu was sworn in for a record fifth term as prime minister on Sunday, May 17, a week before he is scheduled to stand trial on corruption charges. His major goal, of course, is to stay out of prison. Not far behind is annexing enough of the West Bank to seal his repeated campaign promises of preventing Palestinian statehood.

U.S. Elections
Under the coalition agreement he can’t bring annexation for a vote before July 1. He wants to get it done before Nov. 3, just in case Joe Biden is elected president that day. Netanyahu knows President Donald Trump has given him a green light for annexation because it pleases the president’s base of evangelicals and Jewish conservatives and big donors.

Biden has already called unilateral annexation detrimental to chances for a two-state solution — something that he supports, Netanyahu opposes, and Trump is ambivalent about. Biden, however, has just as emphatically rejected as “outrageous” any suggestion by some Democrats of using aid as “leverage” on Israel. Biden also said that he would not try to reverse Trump’s decisions to recognize Jerusalem as Israel’s capital and the move of the U.S. embassy there from Tel Aviv. Instead, he has said that he would focus on restoring relations with the Palestinians, something the current administration has abandoned.

Possible Campaign Wedge
Several Democratic senators tried to round up signatures on a letter to Israeli leaders warning “unilateral annexation” would “undermine” bipartisan support for the “special relationship” but they found few takers. No politician wants to go on record threatening aid to Israel, particularly in an election year.

Republicans will quickly turn any criticism by Biden or other Democrats into a campaign wedge issue. Trump can be counted upon to repeat his charges that Biden and his party are “anti-Jewish” and he may even resurrect his attacks on Jewish loyalty, and the Republican Jewish Coalition has already exhumed its slanderous attacks on Biden as “anti-Israel.”

Netanyahu is talking about annexing as much as 30 percent of the West Bank, including more than 130 Jewish settlements and almost as many smaller outposts plus the Jordan River valley, with a Jewish population in excess of 400,000. An estimated 2.7 million Palestinians live throughout the West Bank.

Israel’s Decision?
Recent polls show he would have the backing of a majority of Israeli Jews, the opposite of Americans, Jews and non-Jews. A Gallup poll in February showed 55 percent of Americans in both political parties support the two-state solution, the highest in nearly two decades. Taking that approach off the table by annexation would only further widen the alarming gap between mainstream American Jewry and Israel.

The Trump administration has several different positions on annexation. Ambassador David Friedman, an ardent settlement supporter and opponent of Palestinian statehood, says that “it’s Israel’s decision.” Secretary of State Mike Pompeo was in Israel recently and said that it is “between Israel and the Palestinians.” First son-in-law and lead author of the Trump peace plan wants to tie it to programs on his masterpiece. The National Security Council and State Department professionals have their own talking points. But ultimately, the policy is whatever Trump says at any given moment and what personal political interest it will serve.

Among American Jewry, J Street, the Israel Policy Forum and the peace camp are strongly opposed; AIPAC and most mainstream organizations are trying to dodge the issue, and out on the extreme right fringe leading the cheering is the Zionist Organization of American, which probably would support annexing everything to the Euphrates.

Jordan (Loudly) Objects
The loudest international objections to unilateral annexation are coming from the king of Jordan.  He avoided making any “threats,” but warned it would lead to “massive conflict” with his country, where the 1994 peace treaty is unpopular and the majority of the population (including his queen) is Palestinian. Jordan already faces deep economic and health crises, which could overflow and be directed against Israel.

It could also lead to the collapse of the Palestinian Authority, which would see all hopes of statehood dashed, and lead to “more chaos and extremism in the region,” Hussein said.

Jordan is a longtime close, stable and reliable American ally (and of Israel). It would not be in the interest of any of the three countries to destabilize the Hashemite kingdom and topple the king.  Although some in the “Greater Israel” extremist camp, who have long preached, “Jordan is Palestine,” might want to see that happen.

Another Treat To Israel
Annexation also poses a democratic and demographic threat to Israel. What should worry Israelis most is if Palestinians newly part of Israel demand full citizenship and start voting. With their high birth rate, they could win in the bedroom what they’ve been unable to achieve on the battlefield. Using the ballot, they could achieve power that could lead to a binational state, exactly what Netanyahu has said he considers the greatest threat to the world’s only Jewish nation state.

Netanyahu promotes annexation of the Jordan Valley as enhancing Israeli security, but that is already well under control. In fact, the nation’s security establishment does not share his enthusiasm for the move, warning it could damage relations not only with Jordan but Egypt and the Gulf states where Israel has been building valuable strategic ties, ironically one of Netanyahu’s most important achievements as prime minister.

Quandary For Netanyahu
Netanyahu has consistently opposed the two-state solution despite some finger-crossed statements of support, as in his Bar Ilan University speech in 2009 under pressure from President Barack Obama. More recently he has repeatedly promised voters there would be no Palestinian state on his watch. Instead, he has spoken about a “state-minus” of disconnected Palestinian enclaves with no sovereignty and no independence.

Netanyahu wants his legacy to be as the leader who secured Israel by expanding its territory of Israel and preventing Palestinian statehood. In the process, he could instead become the man who created the binational state and destroyed the Jewish nation state. All that while also becoming the second prime minister to go to prison for corruption.

Does gospel-preaching ‘Shelanu’ TV channel violate Israeli law against proselytizing?
Saudi writer: We care about national interests, not the Palestinians