DC Report: Peace plan not — more like Monopoly’s Get Out of Jail Free card

DC Report
By Douglas Bloomfield
If you really want to know how serious President Trump is about Middle East peace, just check out the Palestinian delegation he invited to the White House along with Israeli leaders for the unveiling of his long-promised Deal of the Century.

What’s that? There weren’t any?

Only Israeli Prime Minister Benjamin Netanyahu and his rival, Benny Gantz, head of the Blue and White Party, in the upcoming March 2 election were invited. Palestinian Authority President Mahmoud Abbas was not. In fact, according to a top advisor, Saeb Erakat, Trump and Abbas haven’t had any direct contact for more than two years.

No Coincidence
That doesn’t matter because the unveiling of the Trump plan isn’t really about peace; it’s a political stunt for a pair of corrupt politicians to divert attention from their “yuge” legal problems. It certainly isn’t because any of the parties is seriously interested in making peace. It is called “counter programming,” a practice Trump picked up in his TV days to divert audience attention from unpleasant to another, more positive event. That’s why Trump is also planning a major trade deal signing and a campaign rally in the immediate future.

It is no coincidence that after many delays Trump decided to hold the unveiling during the week of his impeachment trial in the U.S. Senate and endless television coverage of the scathing indictments of his high crimes and misdemeanors. Meanwhile, 5,914 miles away the Knesset will be deliberating Netanyahu’s request for parliamentary immunity from prosecution on charges of fraud, bribery and breach of trust.

Trump is no more serious about making peace than truthfully testifying at his impeachment trial or letting anyone else take the stand. That is painfully evident in what we’ve learned about the contents of the peace deal put together by his team of White House Likudniks in coordination with Netanyahu and his team.

This is about Trump playing to his base of evangelical Christians and Jewish conservatives, particularly those who are among the GOP’s biggest contributors.

In just over four weeks Israel will hold its third election in less than a year after Netanyahu was unable to form a government following two previous votes. Gantz is running for prime minister and Netanyahu is running to stay out of jail, and for that he needs to keep his job.

Abbas has played into the hands of his foes, largely but not entirely by his own intransigence and ineptitude. He broke off contact with the administration after Trump declared Jerusalem 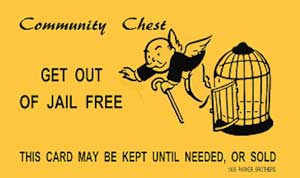 A Get Out of Jail card from the Monopoly Game. Is the peace plan presentation an effort to  divert attention?

the Israeli capital and moved the U.S. embassy there. Trump also closed the PLO Washington office, deeply slashed aid to the Palestinians and cut Abbas out of the process of drafting his peace deal.

Abbas is being set up to take the fall for the failure of the Trump plan. He will say “no way” while Netanyahu says, “yes but,” which means the same thing but with a different tone that shows Netanyahu knows best how to play to Trump.

Palestinian factions have already called for “days of rage” in response to the Trump plan. Abbas may threaten to end security cooperation or even dissolve the Palestinian Authority. That will only benefit Israelis who will say, “See, I told you there’s no partner for peace.” Netanyahu will then feel free to proceed with his campaign promise to begin annexing large portions of the West Bank and particularly the Jordan Valley.

Conflict Continues
Gantz had said releasing the plan now would be a “gross intervention” in the Israeli election, but Trump and Netanyahu boxed him in and he couldn’t refuse the invitation without making his rival look like the sole proprietor of the valuable U.S. account. Gantz, by the way, is no left-wing peacenik; he also supports annexing the Jordan Valley.

Dan Shapiro, the previous U.S. ambassador to Israel, wrote in Haaretz, “If the Trump plan is implemented by the United States and Israel without an agreement with Palestinians, it will not represent an end to the conflict, but rather its perpetuation in a new form.”

Peace Awaits New Leadership
That doesn’t seem to bother Trump or Netanyahu; for them it’s political theater. Both used their meetings to make pious speeches about peace, security and friendship but it’s really about furthering their own political interests. Don’t be surprised if Netanyahu gets his friend Donald Trump to press Gantz to join a unity government with the incumbent, who is desperate to avoid going to court.

Abbas, who will be on the outside looking in, will complain and make threats. Friends will tell him to wait until there is a new government in Washington.

In a rare moment of candor, Jason Greenblatt, who until late last year was Trump’s special envoy for Mideast peace, told a group at a New Jersey synagogue recently that he didn’t believe either side was ready to “come to agreement on these tough issues.”

He’s right. The bottom line is nothing can happen until there is new leadership on all three sides —Israeli, Palestinian and American— with the courage and strength to make tough historic decision. Til then, it’s just photo-ops and sound bites.

As Holocaust revisionism grows in Europe, Israel steps up commemorative efforts
Agudath Israel of America fails New Jersey on measles’ vaccines! Why the change in stance?