DC Report
By Douglas Bloomfield
Vice President Mike Pence has shamelessly prostituted himself to stay in Donald Trump’s favor, which is the kind of loyalty this president demands. Pence, an intensely religious man, has sold his soul to testify to Trump’s righteous moral character and religious tolerance.

Even while strongly supporting Trump’s Muslim ban, Pence praised the president for acting to “ensure that the federal government will never, ever penalize anyone for their religious beliefs ever again.”

Candidate Trump needed Pence to assure evangelicals that he deserved their votes, that he would be true to their faith by opposing abortion, gays and immigrants while appointing the judges they want and protecting their guns. Trump delivered for them.

No Longer Needed?
So well, in fact, that Trump doesn’t need Pence any more. He has got evangelical leaders like Franklin Graham, Jerry Falwell Jr., Ralph Reed, Tony Perkins and Pat Robertson singing hosannas to him.

Few ever escape Trumpworld with reputations unscathed. One exception is former U.N. Ambassador Nikki Haley, who left on her own terms last fall, right after the midterm elections that showed Trump’s and the party’s weakness among women voters.

What is Haley Doing?
She said she would not challenge Trump in 2020 but campaign for him; meanwhile, she is trying to make big bucks in the private sector before a likely run for president in 2024.

There have been reports that Trump is asking friends whether they feel Pence is loyal to him, although he tweeted that no president has had “a better or closer relationship with their vice president than the two of us.”  That doesn’t mean much coming from Trump.

Weld Announces
So far, only one Republican is running against Trump, former Massachusetts Gov. Bill Weld. Trump seems to be ignoring him, not even a tweet or nasty nickname.  Weld is 73, a year older than Trump. In 2008 he endorsed Obama and in 2016 ran for vice president on the Libertarian ticket. He is a social liberal and fiscal conservative.

Elaine Kamarck of the Brookings Institution said, “I think a lot of people would like to see somebody take on Trump in the Republican primaries” but it “really has to be somebody with impeccable conservative credentials.” That’s not Weld.

Watching And Waiting
And possibly not Maryland Governor Larry Hogan, who just handily won a second term in a solid blue state with a reputation for bipartisan cooperation. He made a recent foray into New 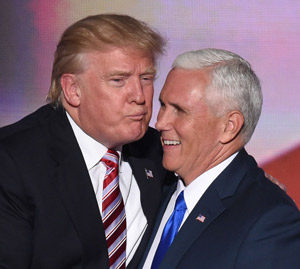 Hampshire.  Others potential challengers are former Ohio Governor John Kasich and former Tennessee Senator Bob Corker.  None seem in much of a rush; the filing deadline for the New Hampshire primary is November, and all seem to be watching Trump’s fortunes.

If his approval ratings stay below 50 percent, as they’ve been consistently, Trump may decide to make a dramatic veep switch.  FDR did it twice; replacing John Nance Garner in 1940 with Henry Wallace and picking Harry Truman in 1944.

Trump Might Pick Haley
Haley would be solid choice to replace the lackluster Pence. Her views on the issues are in step with Trump.

One exception may be immigration. Haley, 47, is the daughter of Sikh immigrants from India; she changed her name from Nimrata Randhawa, married Michael Haley in 1996 and converted to Christianity. She was the first Indian-American woman elected governor and first female governor of her native South Carolina, where she served in the state legislature before becoming governor in 2010.

It is unclear how Trump’s white supremacist base would react to a person of color on the ticket.

As governor she cautioned, “Don’t follow the siren call of anti-immigration anger,” which is just what Trump has been doing.

She seems in step with Trump on nearly all other issues, though, including abortion, transgender rights, unions, environment and foreign policy. She could be valuable in winning women’s votes — Pence sure isn’t — by compensating for Trump’s misogyny.

She won great favor among friends of Israel, Jewish and Christian, for her staunch defense of Israel at the United Nations and close cooperation with its diplomats. She is a popular speaker at Jewish events and could help the ticket among some swing voters if she appears to be a moderating influence on Trump.

However, while she may be popular among many of Israel’s friends, her positions on most of the domestic issues are far out of step with the views of a strong Jewish majority.

Writing A Book
Friends say she left the administration early to capitalize on her fame in the private sector before deciding about 2024. She just got a seat on the Boeing board, which pays $324,000 a year in cash and stock benefits. As governor of South Carolina she was instrumental in preventing Boeing workers from unionizing at the Charleston factory, which is the subject of reports of shoddy production and poor oversight that have threatened to safety of planes’ workers and passengers.

While a decision to replace Pence with Haley might help win Trump a second term, there is another possibility that may be causing unease at the White House:  if the incumbent seems to be stumbling as the 2020 campaigns begin in earnest, the ambitious former governor could move up her ambitions and challenge him for the GOP nomination.

Like all presidential wannabes she is writing a book, now scheduled for release this fall as the campaigns heat up. She’s also started her own public advocacy group, Stand for America, pressing her hawkish foreign policy views and staunch conservatism.

Considered Strong Challenger
The State, South Carolina’s largest paper, cited a poll commissioned by a conservative advocacy group critical of Trump saying she would be the strongest of 10 potential challengers to Trump in a Republican presidential primary. The first southern primary will be in South Carolina, where she remains very popular.

Democrats are hoping she will challenge Trump and do for him what Pat Buchanan did for George H. W. Bush in 1992, Ted Kennedy for Jimmy Carter in 1980 and Eugene McCarthy for Lyndon Johnson in 1968.  Namely, inflict enough wounds in primaries to cost the incumbent re-election. It started with strong — if not winning — showings in the first-in-the-nation primary in New Hampshire, Weld’s native state and where he is focused now; right after that is Haley’s home state of South Carolina.

One decision facing Trump is whether Haley would be better for him on the ticket or if he should hang on to Pence and hope that his former UN ambassador will keep her word to campaign for him. For Haley, a key decision is whether being on a ticket with Trump will damage her future presidential ambitions; if the Trump ship seems to be foundering, wouldn’t it be better to take him on next year than to join forces with the controversial, divisive incumbent?

Meanwhile, Pence, the pious, must be praying hard that his boss will let him stay on the ticket and become Trump’s logical successor in 2024.