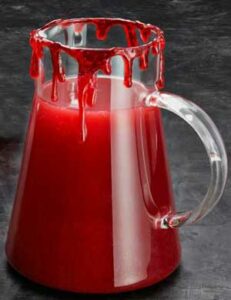 Today’s beverage of choice in the Senate Republican cloakroom is Trump Cool-Aid. In Trumptown the faithful are expected to show their loyalty to their cult leader by swallowing his deceitful beverage in its entirety.

Even before the impeachment trial of Donald Trump began, Senate Republican Leader Mitch McConnell announced that he had no intention of honoring his solemn oath of “impartial justice” and instead he intended to co- ordinate closely with the White House.

New Loyalties
In a similar vein, Senator Lindsey Graham, Trump’s part-time caddy, declared “I’m not trying to be a fair juror here.” Just over four years ago he called Trump a “race-baiting, xenophobic religious bigot” who was “unfit for office.” Then Trump was elected, and Graham drank the Cool-Aid, hoping to be “relevant.”

Other GOP senators have also said much the same. For the most part they want no witnesses, no documents and no new evidence.

Obvious Question?
The six-page letter and lengthy brief filed by the president’s lawyers read like they’d been heavily edited by someone with a Sharpie and no knowledge of constitutional law. At the heart of the president’s defense is his insistence that he “did absolutely nothing wrong.” This raises the obvious question: so why does he refuse to turn over any documents or allow top advisors to testify?

The biggest joke in Washington is Trump’s defense that his refusal is based on his desire to protect the presidency for all those who will hold the office in the future. Bubbehmysis. Trump’s interest always has been and always will be Trump.

Maybe it’s because he knows facts are irrelevant when he has 53 votes ready to dismiss the case without hearing any evidence no matter what his crimes may be. And because he knows most senators are more frightened of his wrath than their constituents.

Sen. Susan Collins of Maine, the faux moderate, is well aware that if she displeases Trump, he could retaliate by endorsing and funding a primary opponent in her race for a fifth term, and she won’t make it to November to face a Democratic challenger.

Trump Leaves Town
Trump wasn’t in town for the open- ing of his impeachment trial. He flew off Switzerland for the World Economic Forum, where he boasted endlessly about his economic achievements, real and imagined.

One place he should be going but won’t is Jerusalem for the gathering of world leaders to mark the 75th anniversary of the liberation of Auschwitz and International Holocaust Remembrance Day. Another reason to attend is this year’s theme is “Fighting Anti-Semitism” at a time when the United States is facing a surge in anti-Jewish violence — in no small measure (some say) the inevitable result of his legitimization of far-right, anti-Semitic and white supremacist extremists.

Vice President Mike Pence and Speaker Nancy Pelosi will be in Jerusalem representing the United States. They are first and second in line of succession if Trump is removed from office.

Diversion Efforts To Continue
Trump will return home to conduct a campaign to divert public attention from the impeachment with a series of rallies, tweets and appearances on state television (Fox). He named eight of his most strident Congressional backers to be his outside defense team in the media.

He added to his Senate legal team two lawyers who previous represented convicted sex offender Jeffrey Epstein. The pair, Alan Dershowitz and Kenneth Starr, will argue before the Senate that Trump committed no impeachable offense by blocking witnesses and documents— that’s the exact opposite of what they argued in the Bill Clinton impeachment.

Trump hasn’t always had such faith in Starr. He has called him “a lunatic,” “a disaster,” a “total wacko” and ”to- tally off his rocker.” Starr apparently redeemed himself by saying nice things about Trump on Fox News.

Seeking GOP Moral Leadership?
Trump, of course, did commit a serious crime. He extorted a foreign power by withholding security assistance in an effort to force it to help smear his political enemies. Then he lied about it (not under oath, he refused to do that) and blocked every effort by the House to call witnesses and see documents. This undercuts the president’s defense.

The loss of Sen. John McCain is painfully apparent in Washington these days. There is not a single Republican in the Senate with the stature or courage to stand up to McConnell or Trump at this historic moment. Apparently there is no one to speak up for a fair trial with witnesses and documents.

Not even Mitt Romney, the former presidential nominee and now junior senator from Utah. This is a time for moral leadership, not for hiding in the cloakroom gulping the Cool-Aid.

Impeached Is Impeached
McCain would be appalled to know his former wingman, Lindsey Graham, has gone over to the dark side.

Moscow Mitch’s ground rules for the impeachment have the earmarks of a Kremlin show trial with no witnesses, no evidence, secret testimony (if any) and quickly moving to a predetermined outcome.

McConnell may have the votes to keep Trump in office (although most Americans want to hear witnesses and 51 percent want to see him removed) for now, but voters may render a different verdict in November.

Whatever the verdict, as Nancy Pelosi said, Trump will always be an impeached president and that stigma will follow him into the history books. Along with much more evidence of his corruption, which is certain to emerge after he leaves office.

Want to influence Israel? The ongoing Zionist Congress election is your chance
SJCC to feature exhibit of emigrants’ items