DC Report
By Douglas Bloomfield
George H. W. Bush was the first and last presidential candidate endorsed by AIPAC. It started with a handwritten note from Tom Dine, AIPAC’s executive director, to Rep. Jack Kemp (New York), chairman of the Republican Platform Committee at the 1988 GOP convention in New Orleans.

“This is the most pro-Israel platform of any party,” Dine told Kemp, and said he could use it as he wished.

Kemp, a pro-Israel shtarker in Congress, made sure the pro-Israel lobby got what it wanted.

A Shift To GOP?
By contrast, Dine and other pro-Israel leaders were uncomfortable with Democratic candidate Michael Dukakis. He had a troubled history with the Jewish community and had tried to insert pro-Palestinian language into the Democratic platform a month earlier in Atlanta.

The Bush endorsement was a highlight of AIPAC’s growing embrace of the GOP and away from the Democrats, although Jews continue voting overwhelmingly Democratic. 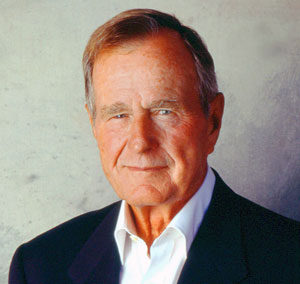 the president’s decision to withhold $10 billion in loan guarantees for housing to resettle Russian immigrants to Israel. Bush insisted the money not be spent beyond the 1967 Green Line, and he demanded a settlement freeze. The Israeli government of Yitzhak Shamir refused.

Kemp had become housing secretary and was to meet with his Israeli counterpart, Housing Minister Ariel Sharon, the hard-charging settlement builder who clashed repeatedly with the Bush administration and particularly Secretary of State James A. Baker III, the president’s close friend.

When Baker learned they were to meet at Kemp’s HUD office he ordered the meeting cancelled. Kemp later told friends that he protested, arguing that his friendship with Israel would be valuable for Republicans in the coming election, and that Baker told him, “Fxck the Jews. They don’t vote for us.” Baker denied it.

Bombing of Iraq’s Reactor
Bush and Baker had a reputation for hostility toward Israel dating to their days in the Reagan administration. During the fight over the sale of AWACS early warning aircraft to Saudi Arabia, strongly opposed by AIPAC and Israel, pro-Israel Republican members of Congress told me that Baker, the White House chief of staff, warned them that they had to choose “Begin or Reagan.” Begin was Israeli Prime Minister Menachem Begin.

Desert Storm
I was one of those highly critical of Bush 41 for not completing the job in Desert Storm.  I felt he should have gone on to Baghdad and destroyed Hussein and his notorious regime.

I was wrong. Bush was right. His mission was to liberate of Kuwait, not occupy Iraq, which would have cost many American lives, thrown that country into chaos and left us there for years as the occupier trying to put it back together, he explained

Later Inept U.S. Policy
The wisdom of Bush 41 was validated by his son’s misadventures in Iraq a decade later. After Desert Storm Hussein was defanged and no longer a strategic threat. Removing him and the Baathist structure made the region much more dangerous, particularly for Israel, not less.

The inept American policy removed a Sunni buffer between Shiite Iran and its allies in Syria and Hezbollah. Iran’s major enemy was replaced with an Iraqi government more aligned with Tehran than Washington. Along the way the United States had opened a dangerous and destabilizing Shiite crescent from the Persian Gulf to the Mediterranean.

The threat is clearest today in Syria, where Hezbollah and Iran came to the rescue of the brutal Assad regime and stayed to further their goal of destroying the Zionist enemy. Hussein was no friend of Israel, but weakened, under international inspection and likely replaced by Sunni leadership, he would not be cozy with the Islamic republic to his east.

Bush 41 was right and had his son shown similar acumen, the region would be safer today.

Protection for Israel
The late president’s finest hour may have been his skill and tenacity in crafting a 35-nation coalition to confront Saddam Hussein and his aid in keeping Israel protected (Patriot batteries) and support on the sidelines.

He thought his swift and decisive victory could open the door to peace between Israel and the Palestinians, but despite some dramatic steps (Madrid Conference), it failed because neither side was ready or interested.

Anger In Jewish Community
The decision to withhold the loan guarantees angered the American Jewish community and friends of Israel. Protests led Bush to overreact, something he later admitted, but the damage was done.

A breaking point came when Bush complained he was just “one lonely little guy” sitting in the White House facing “a thousand lobbyists on the Hill” opposing his loan guarantees decision.  To many Jews around the country and across the political spectrum his words smacked of anti-Semitism and translated into that old charge of “dual loyalty.”

As far as Jewish support was concerned, Bush never recovered and his party has had a long, slow climb back, still not at the level of voter support when Bush won in 1988. That year he got 35 percent of the Jewish vote, much reasonably attributable to AIPAC’s open endorsement; by 1992 it was only 11 percent. Only Mitt Romney (30 percent) in 2008 got above 24 percent since then.

Emotions ran strong, but I don’t believe Bush 41 was an anti-Semite or anti-Israel. Indifferent would be a better word. Amb. Dennis Ross, who worked for him and other presidents, has said that Bush “did not have an emotional attachment to Israel.”

Many Mitzvot For Jews
The Jewish vote did not sink his re-election.  He did that himself. His skill and success in foreign policy were overshadowed by a perception among voters back home that he was out of touch with their concerns.

He is being acclaimed as a man of decency, integrity, compassion, respect, dedication to public service, grace and, of course, prudence. The outpourings of affection and appreciation around the world are no doubt sincere, but may also be an expression of how many perceive that such qualities are missing in the current president.

Bush will be remembered for many great mitzvot for the Jewish people. He was instrumental in rescuing the Jews of Ethiopia, getting Jews out of Syria, repealing the nefarious UN resolution equating Zionism with racism, bringing Israeli and Arab leaders to sit at the same table at Madrid. The fall of the Soviet Union and the liberation of eastern Europe meant freedom for millions of Jews.

For this, former ADL leader Abe Foxman said, “When you add up the Jews he saved, he will be a great tzaddik.”