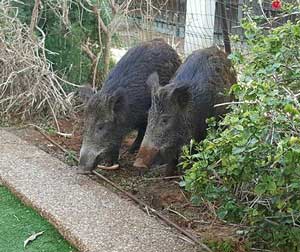 By SAM SOKOL
JERUSALEM (JTA) — Wild boars are stalking the streets of Haifa these days, and some residents say they feel like they “live in a jungle.”

It all started when the northern Israeli municipality halted efforts to keep down the pigs’ population.

While some city residents told the French news agency AFP they were unconcerned, others are worried about having the animals in their urban environment. They say the animals, which used to come out only after dark, have been spotted in full daylight.

“They come to our houses and gardens. We’re scared for our children,” one resident said. “Some kids might scare the piglets, which might aggravate” their parents “and make them attack children.”

Mayor Einat Kalisch-Rotem recently halted the practice of allowing hunters to curtail the boar population, leading to their expansion into the city.