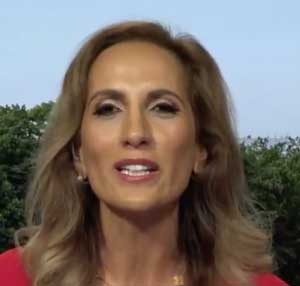 (JNS) – U.S. Deputy Special Envoy for Monitoring and Combating Anti-Semitism Ellie Cohanim  recently slammed Twitter for censoring Donald Trump, but not Iranian Ayatollah Ali Khamenei, who has repeatedly called for Israel’s destruction, saying that it’s “clear” that all that the social media company cares about is the November presidential elections.

In an interview on Fox News on Friday, Cohanim said that she and her family had to flee Iran during the 1979 revolution and increasing anti-Semitism. “So, I can tell you that I personally understand the threat that…Ayatollah Khamenei presents to the Jewish people and to the world,” she said.

Cohanim also said, “The hypocrisy is so thick it becomes clear to me … that this is about one thing and one thing only and that’s the elections coming up in the United States on November 3rd.”

Recently, Ylwa Pettersson, Twitter’s head of Public Policy and Philanthropy for the Nordics and Israel, told Israel’s Knesset Committee for Immigration, Absorption and Diaspora Affairs, “We have an approach toward leaders that says that direct interactions with fellow public figures, comments on political issues of the day, or foreign policy saber-rattling on military-economic issues are generally not in violation of our rules.”

Blue and White Party Knesset member Michal Cotler-Wunsh then asked Pettersson, “So, calling for genocide is okay, but commenting on politics is not?”

To which Pettersson replied: “If a world leader violates our rules, but if there is a clear interest in keeping that on the service, we may place it behind a notice that provides some more context about the violation and allows people to click if they wish to see that type of content. That is what happened for the Trump tweet. That tweet was violating our policies regarding the glorification of violence, based on the historical context of the last line of that tweet, and the risk that it could possibly inspire harm and similar actions.”

She continued: “And, as it was in the interest of the public to keep that on the platform, we decided to keep it up, place it behind a notice … to limit the interaction with it, but because it is of importance to have it remain so that the citizens can see what their political figures are commenting and hold them accountable for what they’re saying online.”

In a statement to Fox News , Twitter doubled down on Pettersson’s claims.

“Direct interactions with fellow public figures, comments on political issues of the day, or foreign policy saber-rattling…are generally not in violation of the Twitter Rules,” said a company spokesperson. “However, if a Tweet from a world leader does violate the Twitter Rules but there is a clear public interest value to keeping the Tweet on the service, we may place it behind a notice that provides context about the violation…”

Khamenei’s “vitriol goes back to 2014 when he laid out a nine-step plan for eliminating Israel,” said Cohanim. “So this is a long history that this man has of calling for genocide against the Jews, for wiping Israel off the face of the earth.”

Cohanim concluded by mentioning that she came to America as a legal immigrant for “freedom” and liberty” and saying that “what these social media companies are doing is that they’re after our very thought process. They’re like the thought police. They’re trying to limit our freedom. They’re trying to limit our abilities to be free Americans. And, what Donald Trump is doing is he’s fighting for our freedom.”