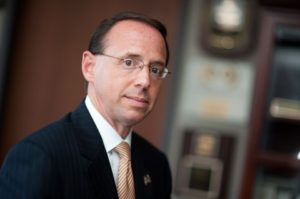 His last day in office will be May 11. Rosenstein had said in January that he would step down when a new attorney general was confirmed; William Barr was confirmed in February

Rosenstein appointed Robert Mueller as special counsel to look into Russian interference in the 2016 elections and was a key player in overseeing the probe that Trump called a “witch hunt.” He made the appointment in May 2017 following the recusal of then-Attorney General Jeff Sessions from all campaign-related investigations.

Rosenstein decided to stay on for the completion of Mueller’s investigation. The Mueller report was submitted on March 22, and released publicly earlier this month in a redacted form.

Rosenstein has come under fire from all sides for his role: Trump was furious with Rosenstein for appointing Mueller, and the president’s allies in Congress at one point sought Rosenstein’s impeachment. More recently, liberals lambasted him for standing by at a news conference while Barr delivered an assessment of the Mueller report that, upon the report’s release, was revealed to be selectively framed to favor Trump.

In his resignation letter, Rosenstein alluded to the pressures.

“We enforce the law without fear or favor because credible evidence is not partisan, and truth is not determined by opinion polls,” Rosenstein wrote. “We ignore fleeting distractions and focus our attention on the things that matter, because a republic that endures is not governed by the news cycle.”

Trump in February named Jeffrey Rosen to replace Rosenstein. The Senate must confirm the appointment.

The deputy attorney general is responsible for overseeing the daily operations of the Justice Department and the work of U.S. attorneys across the country.

Westernization of Arab demography
U.S. Army veteran arrested for planning attacks against Jews and others