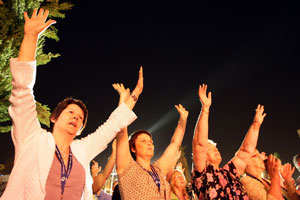 Worshippers of God TV pray in the Old City of Jerusalem during an event of the GOD TV on May 14, 2008. Photo by Kobi Gideon/Flash90

By ISRAEL KASNETT
(JNS) – A new television channel “Shelanu” just came on air that may violate Israeli broadcasting laws against missionizing. GOD TV has signed a seven-year contract with Israeli cable-television company HOT, giving it the ability to preach gospel to more than 700,000 Israeli households. The deal has caused an uproar in Israel, with many calling for the terms of the deal to be investigated and for the channel to be taken off the air.

Legality?
While this is not the first attempt or even the first Christian evangelical station that is broadcast on cable TV in Israel—Daystar and Middle East TV both broadcast in Israel—it represents the first missionizing program in Hebrew on cable TV. The Cable and Satellite Broadcasting Council says that it is conducting an investigation to determine whether “Shelanu violates the terms of its license, which prohibits any programming that wields “undue influence” on viewers. This would include proselytizing.

Avi Bell, a member of the Faculty of Law at Bar-Ilan University in Ramat Gan and the University of San Diego School of Law, as well as a senior fellow at the Kohelet Policy Forum, told JNS that while it is legal to missionize in Israel, “it is not legal to offer material benefits in order to induce someone to convert.”

According to an article in Israeli daily Haaretz, Asher Biton, chairman of the Cable and Satellite Broadcasting Council that regulates cable providers, including HOT, said, “According to our regulations, it is fine to broadcast religious programming, but it is forbidden to broadcast content that has the potential to influence viewers in an undue fashion, and most certainly young and impressionable viewers.”

So while it’s legal to missionize in Israel (though not to minors), it is possible that GOD TV is violating the terms of its broadcasting license.

Communications Minister Dudi Amsalem has said that he would “not allow any missionary channel to operate in the State of Israel at any time and in any situation.”

In a video message announcing the launch on his organization’s website, GOD TV CEO Ward Simpson said, “GOD TV has been given government permission to broadcast the gospel of Jesus Christ—Yeshua the Messiah—in Israel on cable TV in the Hebrew language. Never before, as far as we know in the history of the world, has this ever been done.”

In-Your-Face
One of the main beliefs of Christian thought for centuries has been the concept of “Replacement Theology” or “Supersessionism,” which says that God’s blessing to Abraham was transferred from the Jews to the Christians. Adherents of replacement theology believe that the Jews are no longer God’s chosen people, and that God has now chosen the church.

Another belief held by many Christians is that the Jews are responsible for the death of Jesus. It is this belief that tragically led to so many pogroms and Jewish deaths over the centuries.

“They have these clips they show their donors about the so-called Messianic Jews who harass individuals in the streets of Jerusalem to believe in Jesus. It’s not meant to be merely persuasive.”

Laurie Cardoza-Moore, founder of Proclaiming Justice to the Nations and host of the award-winning evangelical Christian television program “Focus on Israel,” has called on the Israeli government to ban GOD TV from broadcasting programs focused on converting Jews to Christianity.

“It is interesting that GOD TV is doing this at this time because we are witnessing a rise in global anti-Semitism,” she told JNS. “Instead of trying to convert Jews to Christianity, GOD TV should be using its platform to teach Christians about their biblical responsibility to stand with Israel and with our Jewish brethren against this insidious lie.”

Bell said he suspects that the statements GOD TV made in the paperwork “are inconsistent with the statements they are making in the U.S. to their donors. If that is the case, not only should their license be revoked, I think there are grounds for criminal action on grounds of fraud.”

Worry ?
Jeffrey Woolf, of Bar-Ilan University’s Naftal-Yaffe Department of Talmud, told JNS that for at least the past 100 years in Israel there was “a large amount of Christian missionary work being carried out in Jewish communities.”

But can a TV program such as “Shelanu” really succeed in pulling Jews away from the fold and into the Christian world?

Citizens Vulnerable
For Woolf, the main problem with the missionizing “Shelanu” channel is that it “takes advantage of the failure of the Israeli educational system in terms of instilling fundamental Jewish knowledge and historical awareness.”

Woolf blames, at least partially, that system for failing to educate Jewish youth and allowing them to become vulnerable to outside influence.

“Anyone with Jewish historical awareness will take umbrage at this attempt to preach to Israelis.”

“The Jewish historical experience for centuries has been rivers of blood after Christians attacked Jewish communities,” he pointed out. “Anyone with Jewish historical awareness will take umbrage at this attempt to preach to Israelis.”

Cardoza-Moore called Simpson’s response to critics that he has no intention of converting Jews “misleading.”

“Unfortunately, Christian history is replete with examples of Christians forcing their doctrinal views on Jews; either through torture or with a disingenuous smile,” she said.

What GOD TV is doing, she said, “is disingenuous,disrespectful, and it is unacceptable.”