Does Nixon’s story contain a warning for Trump?

DC Report
By Douglas Bloomfield
This summer marks 45 years since night watchman Frank Wills found the latch taped over on a door at the Watergate office complex, a discovery that started a chain of events culminating on Aug. 9, 1974, with the resignation of the president of the United States. Many today find parallels between the disgraced Richard Nixon and the scandal-ridden presidency of Donald Trump.

Premature Talk
Barely six months in office, this administration is more enmeshed in scandals and investigations than any in history in so early a time period. There is already a special counsel probing links between the presidential campaign and the Russians, and new evidence emerges almost daily.

There’s growing talk of impeachment but that is premature. The investigations are in early stages and may yet exonerate the president.

The inquiries continue and grow, and the president, his sons, aides and even his lawyers have lawyered up in anticipation of facing federal prosecutors and congressional hearings.

Nixon resigned more than two years after the Watergate break-in, and the investigations were pursued by a Democratic congress, although with widespread Republican support.

But so far top Republican leaders, despite their personal disdain for this president, has been reluctant to consent to more than slow and limited investigations. 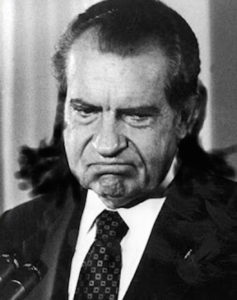 The history of the late and former President Richard Nixon may be a cautionary tale for President Trump.

Differences And Similarities
There are many differences between the two presidents and some troubling similarities.

Nixon had been a war veteran, congressman, senator, vice president and policy wonk; Trump had zero military or government experience and seems to have disdain for the intricacies of public policy.

Nixon was an ardent Cold Warrior who didn’t trust the Russians; Trump is reaching out to embrace the Russians, who meddled in the 2016 election in an apparent attempt to sway the vote his way.

Under Nixon American leadership of the West was unchallenged; under Trump it appears to be swinging to the Europeans, particularly the German chancellor.

Both expressed strong public support for Israel but privately dabbled in anti-Semitism. Nixon had his Jewish advisors — Henry Kissinger, Herb Stein, Leonard Garment, and William Safire — and Trump has his Jewish daughter and son-in-law Jared Kushner and a whole slew of Jewish lawyers and bankers.

Nixon’s tapes revealed an ugly streak of anti-Semitism. Trump used anti-Semitic imagery in his campaign against Hillary Clinton and Bernie Sanders, and he was reluctant to renounce support from white nationalists, neo-Nazis, Ku Klux Klansmen and other right-wing bigots.

When he was in Warsaw recently, he refused to visit the memorial to the Warsaw ghetto victims, as had all previous presidents since the end of the Cold War. The Polish Jewish community considered it an insult, especially since he was speaking to other Poles barely a mile away. After the criticism, he sent his daughter Ivanka, a convert to Judaism, to lay a wreath at the site, but in her remarks she never mentioned Jews or the Holocaust.

It wasn’t the first time. The president’s first Holocaust Remembrance Day message made no mention of Jews or anti-Semitism; aides later said that was because he wanted to be “inclusive.”

Of Tapes And Truth
Nixon’s secret Oval Office tapes were his Achilles’ heel, sealing his impeachment. Trump tried to intimidate FBI director James Comey by saying he might have taped their conversations. He later said he was bluffing, but which version is the truth?  We may never know, or at least until the Congress subpoenas the recordings and Trump has to prove they don’t exist.

Like Nixon, Trump has only a nodding acquaintance with the truth. Just as Nixon declared, “I am not a crook,” which he was, Trump sent out a spokeswoman to announce, “The president is a not a liar.”

Both presidents made waging war against the media a key part of their agenda because they felt it appealed to their anti-intellectual base.  They go looking for “every opportunity to pick a fight,” White House correspondents Julie Pace of the AP and Peter Baker of the New York Times told Politico. It has a dual purpose:  discrediting negative news about the administration and feeding the anger and hatred the administrations have nurtured in the base.

Trump and his aides deliberately feed false information to reporters and then attack them either for reporting the lies or exposing them. Both presidents had press secretaries with near-zero credibility, Ron Ziegler and Sean Spicer, largely due to trying to keep up with their president’s lies.

Trump is loathe to admit mistakes or take responsibility, instead blaming others for anything that goes wrong, or simply lying about what he may have said or done.

Lists Of Enemies
Both presidents shared an obsession with plugging internal leaks, and they compiled long lists of enemies. While Nixon brooded in secret, Trump attacks in public with mean, bitter and often cruel tweets. Both tried to get the CIA and FBI to quash investigations into their scandals. Nixon had a squad of “plumbers” to stop leaks, even resorting to breaking and entering. Most of Nixon’s plumbers, White House senior staff and even his former attorney general and campaign manager wound up in prison.

Only too late did Nixon seem to understand his fatal flaw, and he only expressed it in his tearful farewell to his staff on leaving Washington for the last time. In an emotional moment of uncharacteristic introspection, he said:

“Always give your best, never get discouraged, never be petty; always remember, others may hate you, but those who hate you don’t win unless you hate them, and then you destroy yourself.”

It is a lesson for Donald Trump. If he heeds it, he could rescue his presidency save the nation from another long national nightmare.