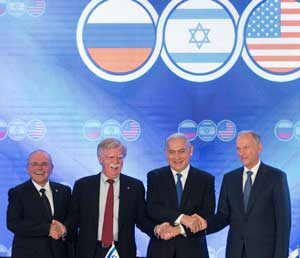 (JNS) – National security advisers from Russia and the U.S. joined their Israeli counterpart in Jerusalem recently for a high-level conference, which was called by Israel to look for ways to restrain Iran in Syria.The results of the conference were not immediately clear, but the fact that it took place was touted by Prime Minister Netanyahu as an indication of Russian and American recognition of Israel’s centrality as a strategic regional actor. It also indicated a Russian willingness to address Israeli concerns over Iranian conduct in Syria, according to Israeli officials.

In a statement prior to the summit, Ben Shabat said that in-depth discussions have been ongoing between Netanyahu and the Russian and American leaderships. He warned that the international community will not be able to promote security and stability in the region “without restraining the ambitions and actions of Iran. The events of the recent period give an additional reminder of this conclusion.”

In his comments at the summit, Patrushev backed Iran’s role in Syria, saying that Tehran is “contributing a lot to fighting terrorists on Syrian soil and stabilizing the situation there.” However, he did offer an acknowledgement of Israel’s security interests.

“We pay special attention to ensuring Israel’s security,” he said, adding that it is “a special interest of ours because here in Israel live a little less than about two million of our countrymen. Israel supports us in several channels, including at the UN.”

As expected, Bolton strongly disputed Iran’s positive contributions to Syria, even pointing out that Putin had called for Iran to leave the country.

“The Russians have said repeatedly that they would like to see Iranian forces leave,” he said

Respect For Israel
During a conference call with journalists, organized by Media Central, a media liaison center based in Jerusalem, Col. (res.) Eran Lerman, a former senior Israeli defense official, discussed the significance of the conference.

“Israel is a player in the Syrian balance of power,” he said. “The Russian leadership has a very healthy respect, based on experience and knowledge, for Israeli military capabilities … this is why this conversation takes place here,” he said.

Lerman served as the deputy director for foreign policy and international affairs at the National Security Council in the Israeli prime minister’s office. He has also held senior posts in military intelligence for over 20 years.

Ideally, he said, Syrian President Basher Assad would be pressured by Russia to oust the Iranians altogether. “But I think we have a fairly realistic assessment, and that is not on the cards,” he said. “So we hope for a very clear delimitation and a capping of Iranian penetration [of Syria]. Gradually getting rid of the Shi’ite militias that the Iranians have been bringing in. And a very clear limit on how much the Iranians can use Syrian territory.”

Plan for Assad?
Iran has been seeking to use Syria, both to destabilize Jordan, and launch attacks on Israel, Lerman noted. While making very specific commitments would be unwise, he said, “clearly, Israel will not tolerate an Iranian presence close to the Golan Heights, or a few kilometers to the north.” But beyond that, he stated, the general policy that Israel would hope for from Moscow is a clear signal, according to which, if Assad wishes to have Moscow comfortably at his side during the very difficult period of rebuilding Syria, “he needs to be much more proactive in not letting the Iranians run the country.”

Lerman described the summit as “groundbreaking,” adding that “unavoidably, this will be extended to the broader situation in the region. I think we can confidently say that this is part of broader of Israeli diplomacy, and the repositioning of Israel in international affairs. It is quite remarkable.”

Israel’s intimate dialogue with Russia is a critical development, he added, “despite major differences.”

“I don’t expect a major breakthrough overnight in Syria. The Russians are in no position to secure the removal of all Iranians from Syrian soil. But I think we can speak about significant progress towards a mutual understanding between all three participants,” he stated.

Questions
The question of whether Iran will continue to use Syria to attack Israel, threaten Jordan, and consolidate its hold on Lebanon, or whether Iran will be marginalized, and Russia becomes the key player in stabilizing Syria, is at the heart of the summit, Lerman argued.

Asked about Russian expectations in exchange for pressure on Iran, Lerman said that further down the road, once the dialogue turns into more concrete steps, “there will be asks on their part from the American side, and greater flexibility from the American side [regarding Russia] than there is now.” However, this is “not something that will happen overnight,” he assessed.

Lerman also drew a connection between the Jerusalem conference, and the economic workshop taking place in Bahrain over the economic future of the Palestinians.

In a statement released during the conference, Netanyahu said that “one of the reasons why the [great] powers are coming here … is of course the strength of the IDF.” He launched the conference with a speech, in which he acknowledged that Israel “acted hundreds of times” to prevent the military consolidation of Iran in Syria. He warned that Israel would continue to prevent Iran from using the territory of states neighboring Israel as a base for attacks, and would respond forcefully to any Iranian-orchestrated attack.