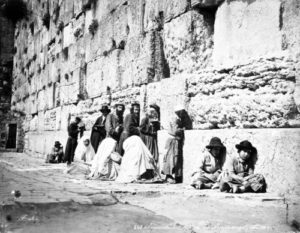 Jewish worshipers at the Western Wall in the 1870s. Photo Courtesy Of Wikimedia Commons.

JERUSALEM (JTA) — Egalitarian Jewish prayer is a protected right in the area set aside for it at the southern end of the Western Wall, Israel’s attorney general told the country’s Supreme Court. The pronouncement means that the state considers the area near the Robinson’s Arch set aside for egalitarian prayer an official part of the holy site, The Jerusalem Post reported.

Attorney General Avichai Mandelblit said in his submission to the Supreme Court on Monday, March 5, that a government official not connected to the haredi Orthodox-dominated chief rabbinate should oversee the site, which would better protect non-Orthodox prayer rights there, according to the report.

Making provisions for non-Orthodox prayer and freedom of access in the area designated for it at the site falls under the “Law for Protecting the Holy Sites.”  The “customs of the site” at the Robinson’s Arch area are for egalitarian prayer, which would not be well preserved by someone, such as the chief rabbinate, that is opposed to such prayer.

Construction recently began to upgrade the area set aside for egalitarian prayer. The work, which has a budget of more than $7 million, comes more than a year after a more comprehensive plan was approved, and more than half a year after the plan was frozen.

In June, the Cabinet suspended the deal passed in 2016 as a result of negotiations between the Reform and Conservative movements, the Women of the Wall, the Jewish Agency for Israel and the Israeli government. The suspension came after the government’s haredi Orthodox coalition partners pressured Prime Minister Benjamin Netanyahu to scrap the agreement. The plan also would have included a common entrance to the Western Wall plaza for all three sections and a public board to oversee the egalitarian prayer space and would include representatives of the non-Orthodox movements and Women of the Wall.

Israel’s Supreme Court during a four-hour session on the issue of prayer rights for women at the Western Wall in February indicated that physical upgrades to the section set aside for egalitarian prayer is key to satisfying the government’s suspended agreement with the liberal Jewish groups.

Grandson of Munich Olympics terrorist wins California Democrats’ endorsement for Congress
Oscars 2018: For Jewish nominees, a night not to remember