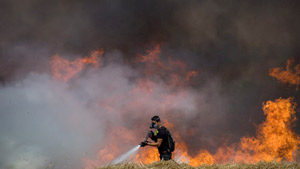 (JNS) – Egypt  has issued a warning to Hamas to put a halt to launching of flaming kites and balloons into Israel from Gaza, according to a report in Ynet.

The ultimatum followed Israel’s announcement on Monday evening, July 16,  that it would close the Kerem Shalom crossing to gas and fuel supplies after Hamas launched a rocket into Israel earlier that afternoon.

Also on Monday evening, Egypt announced that it would temporarily close the Rafah crossing in the wake of a technical malfunction.