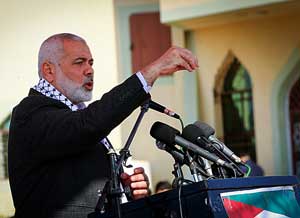 By DANIEL SIRYOTI
(Israel Hayom via JNS) – Egypt is outraged that Hamas leader Ismail Haniyeh attended the funeral of former Quds Force commander Maj. Gen. Qassem Soleimani in Tehran on Monday, Jan. 6, with a high-ranking Egyptian official calling it a “shameful attack” on the country’s honor.

Soleimani was killed in a U.S. airstrike in Baghdad early Friday morning, together with Iraqi Shi’ite militia commander Abu Mahdi al-Muhandis. Haniyeh eulogized the late military leader, saying, “We have arrived to condole Supreme Leader [Ali] Khamenei and the Islamic Republic over the death of Soleimani.”

The Hamas leader added that “the project of Palestinian resistance will not weaken and will not go backward. The assassinations give us more strength to liberate Jerusalem. Qassem Soleimani devoted his life to resistance, and he is a shahid [martyr] of Jerusalem.”

According to a high-ranking official in Egypt’s intelligence apparatus, Haniyeh had been told in no uncertain terms by Egypt and Saudi Arabia that both countries objected to his participation in the funeral ceremony. The official also said that Cairo had allowed Haniyeh to leave the Gaza Strip via Egypt for a round of international visits based on Haniyeh’s promise that his tour would skip Tehran and would not include any meetings with the Iranian leadership.

However, Haniyeh failed to live up to his commitments, and some of his associates sent messages back to Cairo and Riyadh informing those governments that Haniyeh had traveled to Tehran because Soleimani’s funeral was a “special event” that demanded the presence of Hamas’s political leader, the official said.

“Haniyeh’s arrival in Tehran, and his attending the funeral and his words in Soleimani’s memory—in which he called [Soleimani] the greatest supporter of the Palestinian resistance and the Palestinian struggle for national recognition—was a disgrace and nothing less than a shameful attack on Egypt’s national honor,” the official said.

“Haniyeh and Hamas have chosen to side with Iran while blatantly ignoring the unmistakable messages from Cairo and other Sunni Arab nations,” the official added. “Qassem Soleimani is responsible for the murder of thousands of Sunni Muslims, including many Palestinians.”