El Al will fly again between Israel and Argentina, decades after the flight that carried Eichmann 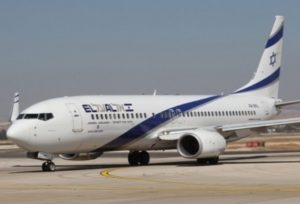 BUENOS AIRES, Argentina (JTA) ­–The national air carries of Argentina and Israeli recently signed an agreement to begin flights between Buenos Aires and Tel Aviv. Aerolineas Argentinas President Mario Dell’Acqua and an El Al vice president met Friday at the Argentine Embassy in Tel Aviv to sign the final agreement. The flights will begin in September.

They will be the first flights between the two nations since 1960, when an El Al flight carried the Nazi war criminal Adolf Eichmann from Buenos Aires to Tel Aviv and his trial in Israel.

Netanyahu Plans Trip
A visit to Argentina by Israeli Prime Minister Benjamin Netanyahu to Argentina is in the planning stages and, if confirmed, he will announce the first official flight at that time. The visit, part of a trip to Latin American countries, is tentatively scheduled for Sept. 12 and 13, and would be the first by a sitting Israeli prime minister to Argentina and Latin America.

“We celebrate the historic event, which means that more Argentinians can travel to visit Israel and also we are happy to see the Argentinian flag in the Israeli sky soon,” Cohen Sabban told JTA from Israel.

In March, Argentine Foreign Minister Susana Malcorra and Israeli Ambassador to Argentina Ilán Sztulman had signed a framework agreement in Buenos Aires. The Argentine Foreign Ministry wrote then on its web page that the agreement “was made possible by the excellent relations that exist between aeronautical authorities, in addition to the historical bonds between both countries. It will be supplemented by the signing of a Memorandum of Understanding which will enable the immediate operation of scheduled flights by the designated airlines.”

According to the announcement in May by Argentina’s official gazette, the commercial flights will have a stopover in the Spanish airports of Madrid or Barcelona.

Eichmann Removal
On May 19, 1960, a special Israeli delegation headed by Minister Without Portfolio Abba Eban left Tel Aviv for Buenos Aires to participate in the 150th anniversary celebration of Argentine independence. At least this was the official version of that inaugural trip, as JTA reported at the time.

But the following day, Eichmann was brought on the El Al plane that had landed in Buenos Aires the day before carrying the diplomatic delegation from Israel. The Holocaust mastermind, who was held in the Argentine capital for nine days, was dressed in the uniform of an El Al crew member.

The flight back to Tel Aviv stopped for refueling in Dakar, Senegal, and on May 22, the plane landed in Israel, where Eichmann was arrested.

The eclipse was exhilarating. Life-changing? Not so much.
British Jews hide being Jewish in public amid rise in anti-Semitic hate