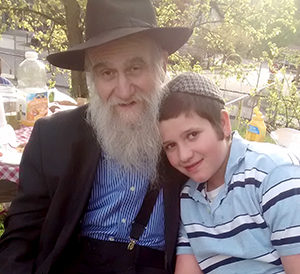 Eli Gordon  and his Zaidy Plotkin.

Eli Gordon, son of Itche and Dini Gordon of Albany was recently announced as the Better 2 Write second place winner, a national Jewish essay contest. Eli’s “Lessons from my Zaidy” was selected in the middle school division. Fifty schools submitted essays in the national contest.

Eli, 11 years old, and in the 6th grade, wrote the essay as part of a Maimonides Hebrew Day School of Albany effort. His essay had been chosen as first place at Maimonides’ middle school. Judges for the school were Sue Ann Grossberg, Ellen Kaplowitz, and Barbara Rossi.

The Maimonides school reports that 17 essays were submitted from the middle school and 10 from the high school.

Students were asked to write about the relationship of seniors with youth and/or their feelings about seniors, aging, and/or the mitzvah of caring for the elderly.

To note Eli’s win, the day school will receive $15,000 for its scholarship fund and Eli will receive a scholarship to a Jewish camp of his choice. At press time, according to the school, a camp had not yet been chosen.

The school has also been involved with a local Better Together project, an initiative that encourages students and senior citizens to develop intergenerational relationships with the goal of helping students foster their Jewish identities while connecting them with living history. Maimonides’ students during the past school year have also been engaged in a Better Together monthly mitzvah program. Each month students and seniors get together for Jewish-related activities.

Lessons from my Zaidy

By ELI GORDON
Do you know what it’s like to be an engraver? Well, my Zaidy is one, and he does very precise and beautiful work. Mostly, he engraves precious metals like gold and silver. His shop is in the heart of Beverly Hills, just one block from the famous Rodeo Dr. Once, when I visited his shop with my family, he engraved all of our names on sheets of plastic, in Hebrew and English. I think he did this about 5 years ago. And guess what? We still have them attached to the doors of our bedrooms.

When I walk into my Zaidy’s workshop, I feel as though I’ve just stepped back in time about one hundred and fifty years ago. It’s dusty and homey, it smells a little musty and it’s not perfectly clean, modern and sleek. While he has the most up to date computers, which he uses for plaques, or cheaper items, he is the only one in the entire California to engrave master pieces BY HAND in English as well as Hebrew.  He uses the same tools, and technique that was used for hundreds of years!  This is a painstaking job, but something that is hand engraved is very high quality, and will last forever.  Even Zaidy himself looks like he comes from a previous century. He has a long white beard, and he wears special optivisors (magnifying glasses attached to a visor, to help him see even the smallest detail).  It’s very interesting that right outside his shop, is one of the most glitzy and glamorous cities in the world. One day, a real prince, from a very small country, walked into his shop to get something engraved.  Zaidy asked the prince to please wait, while he ran to the back room to call a Rabbi and ask if he should say the special blessing that is said when seeing royalty!

You see, my Zaidy knows how to blend the modern world with old fashioned traditions. Very wealthy people come to his shop all the time (after all, it is a real luxury to get something engraved). They all respect Zaidy for who he is, and appreciate his traditional values. This is extremely important lesson to me.  Some people think that Jewish traditions and the modern world have ABSOLUTELY  NOTHING in common. Zaidy teaches me that you can interact with the world, and stay true to your traditions..

Last time my family visited him for Pesach, Zaidy asked me, early one morning, if I would like to do something with him. Out of curiosity, I decided to go. We went an old age home were my Zaidy gave out matzos and put Tefillin on some elderly people.  My Zaidy later told me that he does this every single morning and has been doing so for thirty years!  You see, Zaidy takes his Tefillin every place he goes.  He doesn’t know if he might find a Jew who has not yet put on Tefillin, and might want to do an extra mitzvah.  Even when we take family trips, like to the park, or even to an amusement park, he takes his Tefillin, and any other Jewish Holiday treats.  Matzah for Pesach, Menorah for Chanukah, Lulav and Etrog for Sukkot.  Here is one of the stories that he told me.

One morning my Zaidy walked into shop and found someone waiting for him. The man said someone had called the workshop and told him he was needed as soon as possible for a movie filming. So my Zaidy drove to the movie set, which was about two hours away. It turns out that Steven Spielberg, one of the greatest movie producers, was making a Holocaust movie, Schindler’s List.  The movie was about a great Gentile, who saved many Jews from the evil Nazis.  The theme of the movie was the verse “One who saves a life, it is as if he saved the entire world.” Steven Spielberg wanted to film my Zaidy engraving that verse on a ring! In the end, the cameras couldn’t capture the right angle of Zaidy’s hands as he engraved the ring, so he was not in the film, after all. But before he left the movie set, my Zaidy asked if Steven would like to put on Tefillin. (of course, he had them with him, just looking to help another Jew do a mitzvah!) Steven Spielberg not only agreed to put on Tefillin, but asked his cameramen to take a video of him doing so! (As a side note, Steven’s mother, Leah Adler, recently passed away.  She was a very proud Jew, and owned a kosher restaurant “The Milky Way.”)

I, along with everyone else reading this essay, can learn a lot from this. My Zaidy was not embarrassed or ashamed to ask a huge Hollywood producer to do a mitzvah. He was proud, and it turns out that Steven took a lot of pride in being Jewish, too. This teaches me that I too, should take great pride in being Jewish. I should show the world that we carry G-d’s name, and that is a compliment!  And while I walk down the street with my Yarmulke and Tzitzis I should hold my head high and not low down, like I want to blend in.