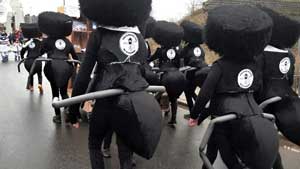 Participants dressed as Chassidic Jews resembling the form of ants at the annual Aalst Carnival in Belgium, which has been accused of rampant anti-Semitism. Source: YouTube.

By THANE ROSENBAUM
(JNS) – The Jewish holiday of Purim, came early in both Belgium and Spain this year—not for Jews, but for those who hate them no matter the millennium. It’s apparently impossible to resist turning an entire people into crude stereotypes and satirical objects of loathing at certain annual carnivals in Western Europe. These popular gatherings of merry-making at the expense of Jews—along with politicians, religious leaders and famous faces—date back to the Middle Ages, and occur before Ash Wednesday and Lent.

The anticipated civility of the enlightenment did nothing to draw some Europeans out from the anti-Semitic cesspool of the dark ages.

Like Purim, these carnivals give permission to satirize the sacred, take the guardrails off the profane and raise the stakes on the transgressive—all in good fun. Well, not exactly like Purim. No self-respecting spiel has ever included such bile.

In Aalst, a small Belgian town, the carnival this year featured grotesque caricatures of ultra-Orthodox Jews wearing large fur hats, deformed noses, with bodies shaped like insects. In other floats, Orthodox Jews were depicted as grasping boxes of diamonds. Marchers in the parade were in Chasidic costumes, with the customary hats, side curls and, of course, aggrandized noses.

Imagine a Purim spiel where Jews dressed up like the KKK carrying nooses, or painted their faces yellow and carried bags of rice or clutched calculators, or showed up wearing traditional Muslim garb adorned with one added accessory—a fake, but highly visible, suicide vest?

This isn’t the first time that the carnival in Aalst went to such elaborately creative lengths to mock Jews. Last year, in fact, the unabashed anti-Semitism of the parade caught the attention of the United Nations, which bounced the town off of its UNESCO Cultural Heritage list.

If the United Nations is standing up for Jews, then you know something has gone terribly awry.

And what were those offending entries? Chasidic Jews, of course, sitting on bags of money. A rat was on one shoulder. One float featured the words: “Don’t ever tell the truth about the Jew.”

In 2013, Aalst parade marchers dressed up as Nazi officers carrying cans of Zyklon B, the poisonous gas used in those chambers disguised as showers for unsuspecting Jews. To complete this disgraceful picture: a float symbolizing the trains that transported Jews to their deaths followed from behind.

The cost and craftsmanship of these floats was equal to the ones in the Macy’s Thanksgiving Day Parade. Except that the Aalst floats have no corporate sponsorship. Individuals of lean means save up each year just to keep up with the Jew-hating Joneses.

The Spanish town of Campo de Criptana was not to be outdone in its own denigration of Jews. Its carnival featured Nazi officers carrying guns, along with striped-pajama-wearing prisoners. A float carried a menorah and two crematorium chimneys—as if the chimneys alone didn’t suggest what was smoldering inside.

On another float, underneath two giant chimneys, a woman dressed in Nazi regalia gyrated alongside a Doberman. Dancing Jewish victims wearing red hot-pants, bustiers and gunshot wounds attached to their hearts danced to the delight of Jew-hating Spaniards.

Now get this: Town officials of Campo de Criptana responded to the international outcry by insisting that they were commemorating, not disparaging, victims of the Holocaust.

As for the Belgian town of Aalst, its mayor said, “I did not see an anti-Semitic or racist parade. To the contrary, I saw a high mass of free speech and creativity.” The chairman of the carnival reassured critics that if any of the floats had “exceeded all limits of decency,” they would have been disqualified.

Well, that’s a relief. Of course, what float then didn’t make the cut?

In the estimation of town officials and organizers, the carnivals were all in good fun—the “just kidding” of kitsch without any malignant intent. Honestly, can’t Jews take a joke?

Not long ago, two out of three of Europe’s Jews were murdered during the Holocaust. The continent will never recover from that loss—not just in the colossal disappearance of Jewish talent and ingenuity, but in the shame and stain that will live with Europeans for eternity. Given this curse, mocking concentration-camp victims, trivializing the evil of the Nazis, depicting Jews as vermin, using blatant ethnic caricatures—all nothing but harmless, unbridled humor, in Europe, the crime scene of all that Jewish dead?

Europe is consigned to a permanent state of moral contrition and inquiry. With the recent resurgence of anti-Semitism worldwide, but notably in Europe, and with the last of the Holocaust survivors still alive, these alarming trends should place the entire continent on red alert, rather than fuel the flame with such carnival fare.

Ironically, many of these nations have hate-speech laws that avowedly protect human dignity. The stigmatizing and targeting of Jews in the public square, endangering them and defacing all of society, is a direct attack against the very meaning of citizenship and pluralism in liberal societies.

Unless, of course, those protections don’t actually apply to Jews.

Thane Rosenbaum is a novelist, essayist, law professor and Distinguished University Professor at Touro College, where he directs the Forum on Life, Culture & Society. He can be reached via his website.

Opinion: A year ago, I went public with my #MeToo moment. Purim reminds me of all we haven’t learned.
Adapting in the time of Covid 19: Congregations get creative