Eurovision 2019: What is the song contest all about? 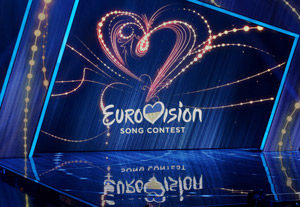 The logo of the Eurovision Song Contest is displayed during the 2019 national selection show, in Kiev, Ukraine, Feb. 23, 2019. Photo courtesy of STR/NurPhoto via Getty Images.

Welcome to the Eurovision Song Contest, an annual pageant in which all of Europe (and some of its neighbors) send national representatives to compete for the best forgettable pop song and most unforgettable outfits.

The competition is huge in Europe and beyond, yet many Americans know little about it. And this year it is being held in Tel Aviv. We break down the music fest for you — including why Israel is a part of it and the controversy about this year’s contest.

What is Eurovision?
Founded in 1956, the Eurovision Song Contest is a musical competition mainly for European countries. Though there’s no cash prize, the 42 countries that compete take it quite seriously. Some 186 million viewers tuned in for last year’s finale.

Each country holds its own internal contest to pick its act for the general competition. All the countries then get together for a series of televised rounds, culminating in a glam-filled finale featuring performances by the top 26 entries.

Since 1973, countries have been able to sing in any language — previously they could sing only in one of the country’s official languages — and most entrants today perform in English.

Each country is given points to award an entry; countries cannot vote for themselves. After the performances, viewers vote on their favorites by phone or on a mobile app. Those votes make up 50 percent of each score — the rest come from a professional jury. The country with the most points wins the contest.

In lieu of prize money, the winning country gets to host the competition the following year. For the winning artists, it’s an opportunity for exposure, though many of them end up as one-hit wonders.

Why is Israel in the Eurovision?
Participating countries must be members of the European Broadcasting Union. Though the organization is mostly made up of European countries, it’s not limited to the continent. The Israel Broadcasting Authority was a member from 1957 to 2017, when it shut down and was replaced as a member by the Israeli Public Broadcasting Corp. Cyprus, Armenia, Morocco and Australia are among the other non-European competitors.

Since joining the contest in 1973, Israel has won four times, placing it in a fourth-place tie with the Netherlands for the most wins. (Ireland is in first with seven.) The Jewish state took home its first gold in 1978 with Izhar Cohen’s version of “A-Ba-Ni-Bi,” a song about childhood love sung in Hebrew pig Latin, then followed up the following year with the sunny “Hallelujah,” which went on to become a Jewish classic. Israel won again in 1998 with “Diva,” an ode to female beauty sung by the transgender star Dana International.

Where in Israel will the contest be?
The 64th edition of Eurovision will be held at Expo Tel Aviv, in the city’s north.

This will be the country’s third time hosting. Israel declined after the 1979 victory, citing financial constraints. Israelis were overjoyed with Barzilai’s win last year, as it ended a 20-year drought.

The Israeli government had insisted initially on holding the contest in Jerusalem — the host country typically has the event in its capital city — but relented eventually following the controversy over the U.S. recognition in 2017 of Jerusalem as Israel’s capital and a subsequent fear of boycotts. Tel Aviv is also Israel’s secular cultural capital.

This year, singer Kobi Marimi will represent Israel with the song “Home,” a heartfelt ballad about self-discovery and homecoming.

What’s the controversy about?
Europe’s pro-Palestinian left has made it a priority to boycott Israel. Only days after Israel won, two Irish EU representatives called for boycotting the Jewish state. In Iceland, more than 27,000 people signed a petition calling for a boycott of the event, but the country’s national broadcaster said it would still participate. A group of 50 British artists, including Peter Gabriel and Pink Floyd’s Roger Waters, also signed a letter to the BBC urging the broadcaster to ask that the contest be held elsewhere.

But Israel has its share of defenders, too, among them the pop queen Madonna, who will be performing at the contest. Recently, more than 100 celebrities — among them Sharon Osbourne, Gene Simmons and Stephen Fry — denounced the calls to boycott. And earlier this year, France’s contestant said even death threats would not deter him from performing in the Jewish state.

There was conflict, too, over what day to hold the competition. The Shalva Band had to drop out of the competition to represent Israel because some of its members are Sabbath observant and thus would not be able to participate in the contest’s final dress rehearsals on Friday night and Saturday during the day. The finale is held Saturday evening.

Security issues
Hamas and Palestinian Islamic Jihad fired hundreds of rockets into Israel over the weekend, and the Israeli army retaliated with airstrikes in Gaza. By Monday morning, however, a cease-fire was in place and it appeared that the situation had largely returned to normal.

Despite the various issues, Israelis are excited about the Eurovision festivities.

“In terms of excitement, the level is only second to Mount Sinai,” joked Eytan Schwartz, CEO of the tourism initiative Tel Aviv Global.

How can I watch it?
Viacom’s Logo channel aired the finals last year in the U.S. and brought in 74,000 viewers, but the company isn’t broadcasting it this year. However, American fans need not despair: Eurovision will be live streaming the contest on its official YouTube channel.