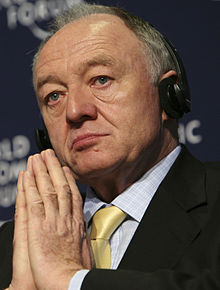 NEW YORK CITY (JTA) – Former London mayor Ken Livingstone, appearing on Iranian state television to discuss the topic “Has the Holocaust been exploited to oppress others?,” repeated his claim that Hitler worked with the Zionist movement to convince Jews to move to Israel.

Livingstone appeared on the Press TV show on Saturday, Jan. 27, which was observed as International Holocaust Remembrance Day.

The show, which was aired on Press TV’s YouTube channel, invited callers to offer their opinions. Several repeated anti-Semitic rhetoric and praised Hitler. One caller asserted that Hitler was “fantastic” for Israel, since “If it wasn’t for Hitler, there would be no Israel.”

At the same time, host Roshan Muhammed Salih talked about how the Holocaust has become an “industry.” He also said, “I don’t know if 6 million died or 4 million or 2 million died … no point arguing over figures is there Ken?” Livingstone responded that there is “no credible alternative” to the 6 million figure.

Livingstone, 71, was suspended for a year from Britain’s Labour Party in April for an April 2016 interview with BBC radio in which he said, “Let’s remember when Hitler won his election in 1932, his policy then was that Jews should be moved to Israel. He was supporting Zionism.”