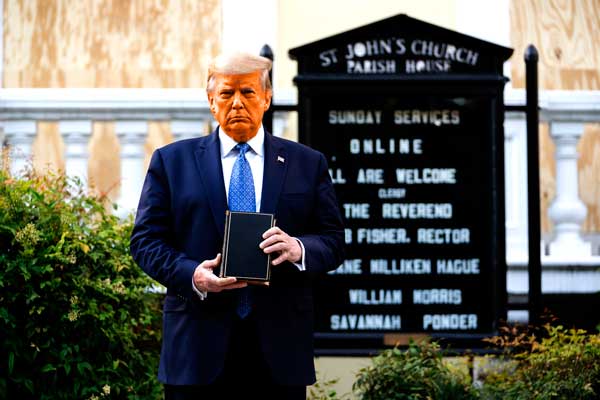 Donald Trump walked from the White House Monday evening, June 1, 2020, to St. John’s Episcopal Church, known as the Church of Presidents, that was damaged by fire during George Floyd demonstrations in nearby LaFayette Square the previous Sunday evening. Official White House photo by Shealah Craighead.

DC Report
By Douglas Bloomfield
Make no mistake.  It was just a campaign photo-op disguised as an exercise of presidential power by an unhinged man drunk with power and terrified that voters will reject him in November.

Campaign Event
On Monday, June 1, with cities in flames, Donald Trump ordered federal troops to fire rubber bullets, flash bangs and tear gas at American citizens peacefully exercising their constitutional rights because he wanted the way cleared to walk across from the White House to pose for campaign pictures in front of the historic St. John’s Church while awkwardly holding a Bible upside down.

Bishop Mariann Edgar Budde of the Episcopal Diocese of Washington said she was “outraged” that he “abused” “one of our churches as a backdrop” to “justify” his “incendiary language.”

You’ll see the picture from now to November in Trump’s campaign commercials, declaring himself “the president of law and order,” not to mention religious faith.

If you had any doubts this was a campaign event, just before leaving for his stroll he announced he was deploying troops “to protect your Second Amendment rights.” Another dog whistle for his white supremacist, pro-gun base. It could be seen as an invitation to violence against the demonstrators he branded “leftist extremists.”

Political Spin
Just a couple days earlier he brought back memories of segregationist Alabama Gov. George Wallace when he had called the largely peaceful protesters “thugs” and warned “when the looting starts, the shooting starts,” echoing the infamous words of a racist Miami police chief and conjuring up memories of Alabama’s notorious “Bull” Connor by threatening to unleash “vicious dogs and most ominous weapons.”

Most prominent Jewish organizations expressed solidarity with the demonstrators, urged non-violence and expressed outrage over the killing of George Floyd. Some condemned Trump’s harsh rhetoric. They can also be expected to oppose the Trump Justice Department’s new request for authority to suspend some constitutionally protected rights during the pandemic and other emergencies, Politico reported. The Democrat-led House is unlikely to go along.

Trump’s over-reaction on Monday may have been in response to his embarrassment over reports that when demonstrators gathered in front of the White House he fled to his underground bunker to watch events on TV and tweet threats, insults and bombast while real leaders, governors and mayors, were doing their jobs. He called for counter demonstrations by his followers —“MAGA Night at the White House”—a surefire formula for violence. Fortunately, they didn’t show up.

Secret Service agents, he said, are outside “just waiting for action” if “protesters” “get too frisky or out of line.” If they do, he ordered, agents should “quickly come down on them, hard—didn’t know what hit them.”

Left-wing Conspiracy?
On Saturday, May 30, he told reporters, “MAGA loves the black people.”  Note that he didn’t say “includes.”  What it sounded like is “we white supremacists love you colored folk as long as you stay in your place.”

In Trump’s narrative the demonstrations were part of a “professionally organized” “left wing” conspiracy “to cause trouble.”  Pulling the strings, he says, is the anti-fascist group Antifa, so he plans to declare it a domestic terror organization.

But he can’t, thanks to Senate Republicans. They feared the law designating foreign terror groups might be applied to domestic groups, notably white nationalist militias, so they exempted home grown terrorists, according to Michael Kraft, a retired State Department counterterrorism involved in drafting the 1995 law.

A Welcome Diversion?
That must be a relief for Trump because it might be applied to his supporters among the “many fine people” who paraded in hoods and swastikas in Charlottesville and the heavily armed militias storming Michigan statehouse, who he praised as “very good people” who the state’s governor (who he called “that woman”) should “make a deal with.”

The demonstrations following the murder of George Floyd in Minneapolis a week earlier must have been a welcome diversion for a president always looking to divert attention from his mounting list of problems.

Like the Corona-19 pandemic death toll reaching over 100,000 Americans. So, he picked a fight with China over Hong Kong. Another with the World Health Organization.  And with Twitter for calling out some of his lies. He muzzled Dr. Anthony Fauci and other experts and trashed his own health agencies because they were disseminating too much bad— but accurate — news he didn’t want to hear. He canceled the release of updated economic projections this summer because the truth might conflict with his own rosy claims.  Or the refusal of Germany and other allies to attend the G-7 conference this month in Washington. He spent millions of tax dollars to fly his family and friends twice to Cape Canaveral for the Space X launch and to claim credit for its success. And don’t forget 40 million unemployed Americans.

Responsible For Nothing?
Trump is notorious for taking credit for everything and responsibility for nothing. That was the theme of his conference call with governors on Monday, June 1. He attacked them as “jerks” for their “weak” response to the protests and urged them to “dominate” demonstrators with force, calling marchers “professional anarchists, looters, criminals, arsonists” who should be sent to “jail for a long period of time.”

Trump has a particular problem dealing with women, especially women of color and power. It is repeatedly on display at his press conferences. When he falsely accused Washington, D.C. Mayor Muriel Bowser of not sending local police to control demonstrators at the White House, she called out his lie and said he’s “just a scared man. Afraid/alone.” She told him to stop “sending divisive tweets that are meant to harken to the segregationist past of our country.”

Atlanta Mayor Keisha Lance Bottoms said Trump’s rhetoric is “like Charlottesville all over again” and “He should just stop talking.”

Silence would be the better part of valor but that’s not his style. A new book by the Washington Post Fact Checker staff called Trump “the most mendacious president in U.S. history.” So far this year he’s been averaging 22 “false claims” (lies) a day and getting worse, it said.

In times of tragedy, past presidents have shown leadership and eloquence as they assumed the cloak of healer in chief. Ronald Reagan after the Challenger disaster, Bill Clinton following Oklahoma City bombing, George W Bush on 9/11, Barack Obama and the mass murder of children at a Charleston church. Where is Trump?  In the White House bunker tweeting threats, curses and hatred or clumsily posing with an upside-down Bible for a campaign ad.

When our cities are on fire, Donald Trump rushes in to toss more gasoline on the flames while Republican congressional leaders hide in shameful silence.

Iranian official: Coronavirus is the handiwork of America
How summer camp has become an American Jewish institution—what happens now?