Exposing election fraud or creating a cover to supress votes? 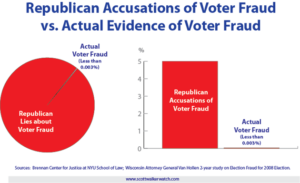 “I consider it completely unimportant who in the party will vote, or how: but what is extraordinarily important is this—who will count the votes, and how.” Joseph Stalin

Donald Trump’s latest assault on the Constitution is masquerading under the misnomer “Advisory Commission on Election Integrity.” Its real purpose is quite the opposite. That is obvious in whom he has put in charge: Vice President Mike Pence and Kansas Secretary of State Kris Kobach. Both have been backers of stringent restrictions on voting by minorities, the poor, the elderly, immigrants and other undesirables. A more appropriate title would be the Committee for Voter Suppression.

He is “an architect of restrictive voting and immigration laws around the country” who has “pushed for laws to require that individuals show a birth certificate, passport or naturalization papers in order to register to vote — laws that could disenfranchise millions of eligible citizens and that have been blocked by courts,” writes Michael Waldman, president of the Brennan Center for Justice at New York University School of Law.

At most, there are very few, isolated and insignificant cases of voter fraud every year. Most are anecdotal. This isn’t really about fraud, but about voter suppression and Trump’s ego. He wants validation of his bogus claim that more than 3 million illegal aliens voted for Hillary Clinton, and he doesn’t care what that will cost taxpayers. Without those illegals, Trump has claimed, he would have won the popular vote. While Pence and Kobach are at it, maybe they’ll also come up with proof that more than 10 million people attended Trump’s inauguration.

Clinton’s popular vote majority included 70 percent of all Jewish voters; another 5 percent were split between a pair of third party candidates.

Convincing The Masses
Trump’s operating theory appears to be that if a big lie is repeated often enough the masses are bound to believe it.

This is partnered with another Trump assault on the Constitution. His latest effort attack on the wall of church-state separation calls for allowing — encouraging —campaign endorsements and contributions from the pulpits. A prime target is the evangelical mega-churches where parishioners are more inclined to follow the guidance of their pastors.

Multiple Registrations Questioned
Under a separate Trump executive order they would be able to make political endorsements and contributions without losing their tax-exempt status.

That doesn’t mean they voted in multiple states or committed any crime, but most likely they simply didn’t change their registrations when they moved. It happens to many people. There is no evidence that such multiple registrations are widespread.

More ludicrous is Trump’s implication that millions of illegal aliens are going from state to state voting. He offers no explanation —because there is none —of how they registered and could pull it off.

The ACLU said that it will go to court to “demand access to the information the administration is using as the basis for its outrageous voter fraud claims.”

Racial Gerrymandering
The crusade to limit voter access just got a setback from the U.S. Supreme Court when even Justice Clarence Thomas agreed with the liberals that the North Carolina legislature unlawfully relied on race when drawing two predominantly black congressional districts.

The Republican-controlled legislature’s intent had been to dilute black voting in the rest of the state to help assure the party’s dominance of at least 10 of its 13 congressional districts, federal courts declared.

This decision “opens the door for Democrats to potentially challenge almost all mapmaking in the South,” wrote Amber Phillips in the Washington Post.

Goal?
Texas is also one of several states cited for a discriminatory voter ID laws that target voters by class, race, party, region and national origin.

The Pence-Kobach commission is looking for excuses to justify these laws that are a 21st century version of the measures used to keep blacks, immigrants and minorities from voting for a century, like poll taxes, literacy tests, discriminatory registration practices, intimidation, threats and violence.

The perps throughout the South were largely Democrats until passage of the 1964 Civil Rights Act and the 1965 Voting Rights Act, after which most became Republicans.

What is Trump’s real goal and why are Pence and Kobach such good henchmen? They are looking to justify extensive restrictions on voting that Republicans can use to keep undesirables as far away from the voting booths as possible.

One method is appointing hardline conservative judges like Neil Gorsuch to all levels of federal courts who will uphold these discriminatory practices.

Studies by scholars and legal authorities across the country consistently demonstrated that the restrictive ID laws are targeting “phantom” crimes that don’t really exist.  One federal judge called Wisconsin’s strict law “a cure worse than the disease.”

The real fraud is Trump’s willingness to appoint a facts-be-damned commission and spend whatever it costs taxpayers just to “prove” his lies about voter turnout and keep undesirables from voting.