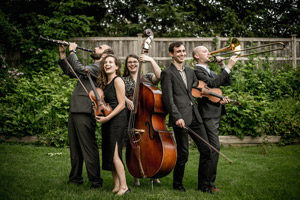 In 2012 they won both the jury-awarded City Winery Prize for best klezmer ensemble and the Audience Pick Award at the third biennial International Jewish Music Festival in Amsterdam, Netherlands.

The band has performed at the Kennedy Center, the Shalin Liu Performance Center, and Yidstock.  The ensemble’s repertoire includes original as well as traditional instrumental tunes, and songs in Yiddish and English.

The event is sponsored by the Nassau Synagogue and Jewish Community Center as a benefit to help support preservation of its historic building, according to organizers. Details may be obtained by contacting by e-mail. fmr732@gmail.com.

Tickets are $25 for adults and $20 for seniors/students/active military. Group sales (10 tickets or more) are $18 each. Day-of-event sales will be $5 more.

Tickets may be purchased at  klez.brownpapertickets.com or  by calling call Brown Paper tickets, 1-800-838-3006.