First flight from Israel arrives in UAE on Aug. 31 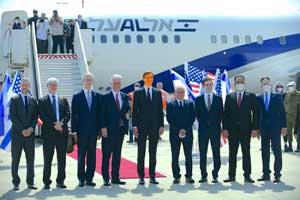 Donald Trump’s son-in-law and senior adviser, National Security Advisor Robert O’Brien and members of the U.S.-Israeli delegation attend a ceremony ahead of their departure from Tel Aviv to Abu Dhabi at Ben-Gurion International Airport on Aug. 31, 2020. Photo courtesy of  Tomer Neuberg/Flash90.

(JNS) – The first commercial flight from Israel to the United Arab Emirates touched down in Abu Dhabi on Monday, carrying a delegation of U.S. and Israeli officials.

Before the plane lifted off, Ben-Shabbat said the purpose of the trip was to advance relations “in a broad range of areas,” according to a statement from the prime minister’s office.

“I am excited and proud to head the Israeli delegation to the talks in Abu Dhabi. We are leaving today for talks pursuant to the declaration by the three leaders—Donald Trump, [Israeli] Prime Minister Benjamin Netanyahu and [Abu Dhabi] Crown Prince Mohammed bin Zayed—on the establishment of peaceful relations. Our goal is to achieve a joint working plan to advance relations in a very broad range of areas: tourism, aviation, innovation, science, technology, health, economic matters and many others. This morning, the traditional blessing ‘go in peace’ receives special meaning for us,” said Ben-Shabbat.

The historic flight was made possible by the surprise announcement by the White House on Aug. 13, of Israel’s and the UAE’s agreement to normalize relations; the UAE is only the third Arab country to recognize the Jewish state since it was created in 1948.

In a joint statement with O’Brien and Kushner on Sunday, Netanyahu said that he was pleased by the speed with which Israel-UAE normalization was progressing. The Emirates’ abolishing on Saturday of the official boycott against Israel, said the prime minister, “opens the door for what I can only call unbridled trade, tourism, investments, exchanges between the Middle East’s two most advanced economies.”

He added, “You will see how the sparks fly on this. It’s already happening.” It won’t be long, predicted Netanyahu, before other countries followed the UAE’s lead.

“The day will come, and it won’t be far away, when we will ask: How could it have been any other way? Because today’s breakthroughs will become tomorrow’s norms. It will pave the way for other countries to normalize their ties with Israel,” he said.

Addressing Kushner, he said: “Jared, from the start you said that more countries would make peace with Israel. You were dismissed, sometimes ridiculed, scoffed at. I’m glad that those critics have been proven wrong, dead wrong.”

While some countries still made “perfunctory statements” in support of the Palestinians, said Netanyahu, “We know that reality has changed, because we have changed it. We are changing it as we speak. I want to thank you for everything that you are doing in this regard.”

Speaking on the tarmac at Ben-Gurion International Airport just before takeoff, Kushner expressed his hope that the flight would inspire Muslims and Arabs worldwide.

“I prayed yesterday at the Western Wall [in Jerusalem] that Muslims and Arabs from throughout the world will be watching this flight recognizing that we are all children of God and that the future does not have to be predetermined by the past,” said Kushner.

No date yet has yet been set for the signing of the agreement, the “Abraham Accord,” but Israeli Cabinet Secretary Tzachi Braverman told Israel’s Kan TV before the flight that a ceremony formalizing the deal will take place in Washington “during the coming weeks.”