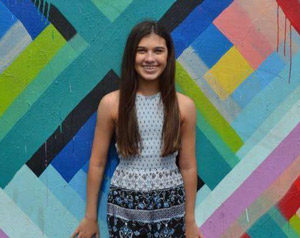 Jamie Guttenberg, one of the Jewish victims of the mass shooting at a Florida high school on Feb. 14. Facebook photo

(JNS) – The Jewish community in Parkland, Fla., was plunged into mourning on Wednesday, Feb. 14, when a former student opened fire on students, killing 17 people at Marjory Stoneman Douglas High School, with at least four Jewish students and one Jewish teacher among the dead.

The deceased Jewish students include Jamie Guttenberg, Alyssa Alhadeff, Alex Schachter and Meadow Pollack. Scott Beigel, a teacher, was also among the casualties.

Guttenberg’s father wrote on Facebook that his “heart is broken.” “I am broken as I write this trying to figure out how my family gets through this,” he said.

Rabbi Bradd Boxman of Kol Tikvah, a Reform congregation in the town close to Boca Raton, held a healing and memorial service after the mass shooting that was attended by community members.

According to Rabbi Boxman, many students from his congregation are enrolled at Marjory Stoneman Douglas.

Rabbi Jonathan Kaplan of Temple Beth Chai counseled parents at the local Marriott hotel whose children were still unaccounted for. Kaplan said that Jamie Guttenberg was among his congregants, and he had tutored her for her bat mitzvah in August 2016, the Forward reported.

Rabbi Shuey Biston, director of outreach and development of Chabad of Parkland, said the Jewish community in Parkland is very tight-knit.

“This is a small community, where nearly half of the population is Jewish, so everyone has been touched by what has happened,” Biston told Chabad.org. “The phones at Chabad have been ringing off the wall as people come for emotional, spiritual and material support.”

Rabbi Mendy Gutnick, youth director at Chabad of Parkland, said that many of the teens are still in shock. “There is one girl we know who was standing between two friends who were shot dead. How can she not be scarred by something like that?” Gutnick told Chabad.org.

White-supremacist Killer
The attack was committed by Nikolas Cruz, 19, who was expelled from the school last year for disciplinary problems. Cruz, who was arrested by police shortly after the attack, was charged with 17 counts of premediated murder and ordered to remain in jail without bond by a judge on Thursday, Feb. 15.

Officials said that Cruz, who used an AR-15 assault rifle for the attack, had a “very disturbing” social-media presence, which included showing a large number of guns and sharing pictures of small animals he had shot, NBC News reported.

Additionally, the leader of a white-supremacist militia called the Clearwater Republic of Florida said Cruz was a member of his group and participated in paramilitary drills in Tallahassee, according to the Associated Press.

Jordan Jereb, the leader of the white-supremacist group, said he didn’t know Cruz personally, and that “he acted on his own behalf of what he just did and he’s solely responsible for what he just did.”

He added that Cruz had “trouble with a girl,” and believes that the attack on Valentine’s Day was not a coincidence.