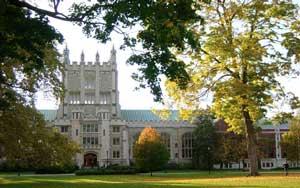 (JNS) – The president of Vassar College released a statement on Monday, Nov. 18. denouncing anti-Semitism in the aftermath of a pro-Israel speaker recently being shouted down.

An event on campus featuring pro-Israel speaker and Israel Defense Forces’ veteran Hen Mazzig was interrupted for 15 minutes by members of Students for Justice in Palestine, who chanted “from the river to the sea,” which is a call to destroy the State of Israel.

“Crossed The Line”
“Last week’s event in which students chanted at an invited speaker was unacceptable,” said university president Elizabeth Bradley in a statement. “The student leadership had committed to upholding our practices of peaceful protest, including not disrupting the speaker. They broke that promise.”

“Furthermore, protesters chose a chant that can be understood to be calling for the eradication of the State of Israel and is highly intimidating to Israelis and Jews, and directed it to an Israeli speaker discussing his perspective on Indigenous Jews,” she continued. “In the days following the incident, I have spent time speaking with and learning from students, faculty, alumnae/i and experts in the field, and I now believe the use of the chant—in this way, directed at this speaker—crossed the line into anti-Semitism.”

She said “we have begun our adjudication processes, which by federal law are confidential.”

Bradley went on to remark, “On this campus, we do not tolerate anti-Semitism, hate speech or discrimination of any kind. I am grateful that after the 15-minute disruption, the invited speaker was able to continue and deliver his presentation to an engaged audience of students, faculty and administrators.”

“Thank you @Vassar President @ehbvassar, for listening to the Jewish community and being brave to admit the mistake. This is a major step forward,” he tweeted.

Thank you @Vassar President @ehbvassar, for listening to the Jewish community and being brave to admit the mistake. This is a major step forward. https://t.co/n5ci3tcA3R