For Teen Vogue, bashing Israel has become the fashion 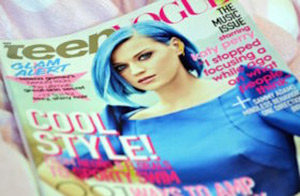 What are the kids reading? A column in Teen Vogue unflatteringly compares policing of minority communities in the United States and Israel. (Lily Hong/Flickr)

By Charles Dunst
(JTA) – Once a must-read for young fashonistas, Teen Vogue in 2016 expanded its coverage, shifting the magazine more aggressively into “covering politics, feminism, identity and activism” from an apparently liberal lens. Now, among articles on makeup, celebrities and clothing trends, Teen Vogue would like to give Israel a progressive makeover.

Blades—Do Better?
The July 16 “Do Better” column by Lincoln Anthony Blades, who writes on race, culture and society, compares the policing of minority communities in the United States and Israel, and not in a flattering way.“ The recent history of police violence enacted on unarmed black and brown citizens by American law enforcement mirrors the recent history of Israel treating Palestinians as violent insurgents,” Blades wrote. “American law enforcement and Israeli military and law enforcement share more than similar modes of policing; they share responsibility for what many perceive are numerous human rights abuses and civil rights violations.”

Common Trope
Conflating the security and policing situations of the two countries—and sometimes blaming Israel for aggressive policing by American law enforcement who have attended counterterrorism seminars in Israel—has become a common trope on the left. So have comparisons of social justice protesters here and Palestinian protesters in Israel, the West Bank and Gaza. It’s the comparison made by upstart New York congressional candidate Alexandria Ocasio-Cortez, who in a recent interview with Glenn Greenwald of The Intercept  likened Palestinians killed by Israeli forces as they tried to breach the Gaza border fence with protesters in Ferguson, Missouri Black Lives Matter protests or the West Virginia teacher strikes.

The Anti-Defamation League and other Jewish groups have long rejected the comparison, saying Palestinian protesters often use violence, and the Gaza protests in particular were orchestrated by Hamas, the terrorist group that controls the strip and has pledged Israel’s destruction.

In his piece, Blades notes that American police have taken part in the counterterrorism training in Israel. But neither Blades nor others who have invoked the training have provided evidence that such training has influenced how U.S. police deal with minorities. The ADL, which hosts many of the counterterrorism programs, points out that it is one of the nation’s leaders in offering training about implicit bias and diversity in law enforcement.

Far-left groups are fans of Teen Vogue’s approach. Jewish Voice for Peace and Code Pink, which both support a boycott of Israel, tweeted favorably about the Blades’ article.

Anti-Israel Agenda
Among the critics, however, is Emily Shire, a writer who identifies as both a feminist and a Zionist. She tweeted about the article, saying Teen Vogue is “shilling what seems ‘woke’ without nuance; here, it’s peddling conspiracy theories about Israel, but many topics get this treatment. It validates my worries about what’s currently the loudest version of feminism.”

In February, Karen Bekker of the Committee for Accuracy in Middle East Reporting in America wrote an article titled “Intersectionality is making Teen Vogue’s editors stupid” saying that the magazine is “pushing a one-sided Palestinians narrative to its teen readers.”

“It’s clear from reading their coverage that Teen Vogue’s editors and writers know very little about the Israeli-Palestinian conflict or the many complex issues involved,” Bekker wrote. “In discussing the topic in December of 2016, the magazine relied on far-left, anti-Israel academic Stephen Zunes, who has elsewhere — absurdly —called the First Intifada ‘non-violent’ and who falsely told Teen Vogue’s readers that there are ‘Jewish-only highways.’” That article apparently referred to a road near the West Bank settlement of Efrat, which has been closed to Palestinian cars and pedestrians since a May 2001 terrorist killing of two Jewish women.

“Despite employing writers with no expertise in the area, the magazine has determinedly pursued an anti-Israel agenda,” Bekker said.

Other Teen Vogue articles on the Israeli-Palestinian conflict—they include “A Letter to Gigi Hadid from Palestinian Youth”; “I Am a Jewish Teen and I Support the Palestinian Cause”; and “At Cannes, Attendees Are Raising Awareness About Palestinian Protester Deaths”—also reflect a left-wing commitment to “intersectionality,” which links support for marginalized groups like women, African-Americans and the LGBTQ community to the Palestinian cause.

“There’s a lot of evidence that defining liberalism through an intersectional lens has had the effect of casting Israel as an ‘oppressor’ and thus a nation worthy of condemnation,” Johnson told JTA, “even as its actual policies on issues associated with intersectionality are infinitely better than those of its neighbors.”