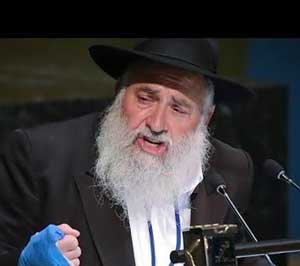 (JNS) – Rabbi Yisroel Goldstein, the former leader of Chabad of Poway in Southern California, was among several defendants who pled guilty in federal court on Tuesday, July 14, to charges of fraud related to a multimillion-dollar tax-evasion scheme that lasted at least eight years. The charges were brought by the U.S. Attorney’s Office Southern District of California following a long-term investigation by the U.S. Department of Justice.

In a press conference on Tuesday, the government said it will recommend probation for the rabbi with no time in custody. Additionally, Goldstein will need to pay $3.5 million in restitution, of which he has already ceded $1 million in gold coins.

Goldstein, 58, gained national attention in April 2019 after a gunman attacked Chabad of Poway on the last day of Passover during morning services. One congregant was killed in the attack in which Goldstein, then senior rabbi of the congregation, was shot and lost a finger in the assault.

Victims
“This case has brought us a great deal of anguish because of the attack on Chabad of Poway,” said U.S. Attorney Robert Brewer. “Sadly, the facts of this case show a willful, devious effort to deceive on the part of a trusted community leader. Evading taxes causes harm not just to the government, but also to one’s fellow citizens, who are forced to bear a heavier burden. Members of Chabad of Poway are also victims of this crime, for those fake donations certainly did not benefit their congregation.”

According to the U.S. Attorney’s Office, the FBI and IRS searched Goldstein’s home in October 2018; he began cooperating with authorities shortly thereafter. According to a release from the U.S. Attorney’s office, Goldstein “received at least $6.2 million in phony contributions to Chabad and affiliated charities and secretly refunded up to 90 percent of the donations to the ‘donors.’ ”

Others Involved
After providing the “donors” with fake receipts, they “illegally claimed huge tax deductions for these nonexistent donations, and the rabbi kept about 10 percent, more than half a million dollars over the course of the fraud, for himself.”

Five other defendants also pleaded guilty to charges against them related to the scheme.

After acknowledging that the sentencing will be up to the judge, Brewer said the government’s recommendation was based on his “past and ongoing cooperation unique record of his lifetime service. There is no question that he founded the Chabad [of Poway] … and it has contributed significantly to the community in a positive way for decades. His role after the 2019 terrorist attack was exemplary. He became a significant advocate for peace and the elimination of violence based on religious hatred.”

Chabad Terminates Relationship
In a statement, Chabad of Poway said it initially learned about the allegations against Goldstein several months ago. “We launched an internal review, following which the rabbi was removed from all of his duties at Chabad of Poway, his relationship with the organization was terminated, and he was dismissed by Chabad-Lubavitch headquarters as a representative of the movement.”

They added that the news could not be made public at the time so as not to interfere with the federal investigation.

“Despite these challenges, we are resolved to move forward together and to distinguish between Rabbi Goldstein’s own misdeeds and the timeless ethical and moral Torah teachings he helped connect us to,” the statement went on to say. “We will continue to serve God with joy, to heal and grow stronger, to share acts of goodness and kindness, and to ensure that Chabad of Poway renews its role as a beacon of light and source of greater inspiration for the greater Poway community and beyond.”

“Enduring Teachings”
Chabad-Lubavitch World Headquarters also released a statement o that read, in part: “Needless to say, today’s news is terribly shocking and troubling. Honesty and integrity—to God and to our fellow—are the bedrock of a healthy, moral society. Rabbi Yisroel Goldstein’s actions broke the law, breached the trust vested by the United States in its stewards of charitable organizations and violated everything that Judaism and our movement stand for.”

“ … To the many who were inspired after the Poway attack by the Torah inspiration Rabbi Goldstein shared and are rightfully dismayed by this news, please know you are not alone,” the statement continued. “While the messenger was clearly more flawed than any of us knew, the teachings remain timeless and enduring.”