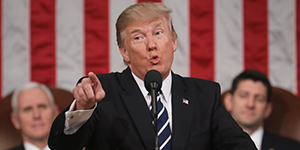 By RON KAMPEAS
WASHINGTON (JTA) – President Donald Trump’s speech to a joint meeting of Congress is getting rave reviews for the subdued, “presidential” style of his delivery, and positive feedback from the Jewish community for opening remarks denouncing anti-Semitic acts as examples of “hate and evil.”

But there ensues the inevitable Trumpian conundrum: What did he actually mean?

Here are four takeaways from the speech and what it says about bias and the Jews:

1. What did he condemn exactly?
From the very first paragraph:

“Tonight, as we mark the conclusion of our celebration of Black History Month, we are reminded of our Nation’s path toward civil rights and the work that still remains. Recent threats targeting Jewish Community Centers and vandalism of Jewish cemeteries, as well as last week’s shooting in Kansas City, remind us that while we may be a Nation divided on policies, we are a country that stands united in condemning hate and evil in all its forms.”

That second sentence —the one that’s been getting the plaudits —gets thorny once it’s held up to the light. According to the logic of the sentence, it is the “recent acts” that “remind us that … we are a country that stands united in condemning hate and evil in all its forms.”

But what actually reminds us that we are united are the responses to such acts, like the thousands of dollars raised by Muslim activists to rebuild a vandalized Jewish cemetery, a labor union’s pledge to pitch in to fix damaged gravesites, a strongly worded statement from the White House.

It was the lack of the last item that had riled Jewish groups in the weeks after the first spate of JCC bomb threats and the first cemetery attack. In both instances, combined with Trump’s failure to comment for six days on what appears to be the recent bias killing of an Indian worker in Kansas, it was Trump’s failure to respond at first — indeed, his hostility to reporters who asked him to respond to the spike in anti-Semitic incidents — that raised hackles.

2. What’s not in the passage
A mosque near Tampa, Fla., was recently set ablaze. Another in Texas was burned down in January and one in Florida, where the killer in the Orlando massacre had occasionally worshipped, suffered a similar fate in September.

Why not include a reference to bias crimes against Muslims? It would be especially apropos given Trump’s overarching theme of unity because Muslims have indeed raised funds to refurbish vandalized Jewish cemeteries and Jews are contributing to the rebuilding of the Tampa mosque.

(Speaking of the Orlando massacre, why not a reference to the LGBTQ community? Trump at the time held up the massacre as emblematic of the protections that gay Americans needed and that he would bring as president.)

A reference to the mosques may have allayed concerns that his travel ban is aimed at Muslims, although it targets seven (or, as of this week, six) Muslim-majority countries, as well as refugees.

Further along in the speech, Trump mentions Muslims in a positive way, as allies against radical Islamic terrorism. But he was talking about moderate Muslims in the Middle East—an alliance that is far afield from the highways and byways traversed by American Muslims.

3. What’s the plan?
Jewish community statements praising the president for his remarks condemning anti-Semitism were almost uniform in asking for a specific government and law enforcement response to anti-Semitic and other hate incidents.

“I was very pleased, that was an important message,” Sen. Ben Cardin, D-Md., said at a meeting Wednesday morning, March 1 of the Helsinki Commission, the body that monitors human rights overseas and in the United States. “But we need to do more.”

“Powerful for @POTUS to note anti-Semitism at top of speech,” tweeted Rabbi Rick Jacobs, president of the Union for Reform Judaism. “Key now is to investigate and end terror campaign.”

Calls for a plan came as Bloomberg News reported that the Trump State Department was considering doing away with the post of anti-Semitism monitor. Granted, the position studies developments overseas, but Jewish groups worry that its elimination would suggest that the administration is not taking the issue seriously. The American Jewish Committee on Monday asked its activists to write the president and urge him to preserve the office.

Cardin told JTA, walking out of the commission meeting, that if anything the office of the anti-Semitism monitor needed bolstering.

“Strengthen it, elevate it, give it more resources,” he said.

4. The other stuff
Trump mentioned Iran and Israel: “I have also imposed new sanctions on entities and individuals who support Iran’s ballistic missile program, and reaffirmed our unbreakable alliance with the State of Israel.” He did not mention the Iran nuclear deal he once reviled, nor did he speak of the Israeli-Palestinian peace deal he has said he would like to achieve.

He did go into some detail on his plans to expand school choice: ”I am calling upon members of both parties to pass an education bill that funds school choice for disadvantaged youth, including millions of African-American and Latino children. These families should be free to choose the public, private, charter, magnet, religious or home school that is right for them.”

That’s a proposal he campaigned on, and it has raised concerns among Jewish precincts that favor church-state separations, but it also has garnered praise among Orthodox groups and other supporters of Jewish day school education.

On Wednesday, the Union of Orthodox Jewish Congregations of America welcomed Trump’s call for federal policy to support school choice.

“We believe there are several ways in which parental empowerment should be pursued to achieve educational opportunity, in the tax code and elsewhere, and we look forward to working with the administration on this priority issue for our community and American society at large,” the O.U.’s Washington director, Nathan Diament, said in a statement.